Cockney in the country 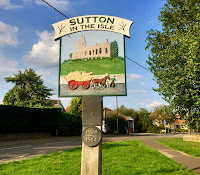 I was born in London and spent my first 18 years living in the "big city" and then, when I went off to university, chose to study at the "northern powerhouse" of Leeds.  Most of my life I've lived in cities - I've enjoyed them for the culture, the busyness - the fact that there is always something going on, always life.  London, Leeds, Miami, Amsterdam, Bangkok, Mumbai ... and now Sutton in the Isle.  When I decided to move back to the UK to care for my mother I had no plans of living in the countryside; I started looking for places to live in nearby towns - but most were above my budget.  I ended up finding a country cottage, and gradually things started to fall into place.  Since August I have been forced to learn many new things - how to grow vegetables, how to cook them - and to relearn things I hadn't done for years such as driving, lighting a wood fire and cleaning the house!

It's very dark here and quiet at night.  I thought I'd be uneasy with that, but actually I have found that I sleep much better - in particular not having to wake up before 6am for work.  I tend to wake up when it gets light - and now that it's winter here that is actually quite late.

However I do miss work - or more to the point I miss a regular income.  For 37 years I knew the date that my monthly salary would arrive in my bank.  Now it's all very hit and miss.  I've done some online workshops, some face-to-face ones, some school visits and so on.  For each of these it seems I have to wait ages to be paid - and that's a worry, because the bills keep on coming at regular times every month.  Another thing I find I'm having to do is to "drum up custom" for months in advance.  I've never been good a blowing my own trumpet, at marketing myself, but I know that this is a skill I need to learn.  I expected the first year of self-employment as a consultant would be tough - but I never expected it to be this tough: to be at the point where I've had to opt to have a tooth out because I cannot afford a root canal, for example.  But I do try to do small things that make a difference - for example I always have fresh flowers on the table and can make the same old sweaters look a bit different with colourful scarves and cheap jewellery.  My "office" is now outside in the garden and it's great to work to the sound of birdsong.

I also miss a ready-made social life.  In international schools overseas you are surrounded by people in a similar situation to yourself - and even when things are tough (as they were in my first few years in India) there are people sharing that toughness with you.  Now I've moved to a village where I know nobody - where friendship groups have already been established for years (decades!) and - let's be honest - my world views are completely different from the views of the 97% of local residents who were born and brought up here.  It's hard to fit in.  I've joined a yoga class and a walking group, but have yet to meet many people of my own age group and life experience, and people who enjoy similar (cultural) things that I do.  But there is stuff going on.  I've visited local artists in their homes and studios, been to a jazz evening, even been to the local church to sing some Christmas carols.  In the summer there was a picnic in the park with fireworks and some heavy metal bands.  You just have to work harder to find these things and you often have to go to them by yourself (which has never really been a problem for me as I've travelled a lot by myself and generally people do talk to you if you are by yourself there). 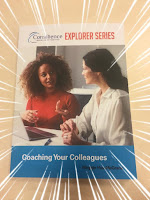 It's not all doom and gloom.  It's great that I can see and support mum several days a week.  London is only an hour away on the train - and both my children now live there.  I see much more of family than ever before, even though I see much less of friends.  And I've done a huge amount of online workshops - which has been my lifeline as I talk with educators around the world every day.  In July I had the time to write a book - which has now been published.  I could never have found the time for that if I'd been in full time work.

But as this year comes to an end I know it's time to take stock.  It has been good to have so much time, but I now need to start working towards a sustainable income.  Basically I need to find a job that gives me regular money each month - at least enough to pay the bills, buy food and put petrol in the car, and at the same time gives me some time to still support mum.  I've thought about supply teaching - but that hasn't seemed to work out.  I've thought about online teaching or online recruitment - maybe there is still something there.  I've thought about trying to do more IB workshops and consultancies.  I've thought about writing another book.

There are some hard lessons I've learned as well.  I've learned that some people that I thought were trustworthy really are not.  In fact I've been treated really disrespectfully and unprofessionally by people who should definitely have known better.  I've had to learn to forgive people who don't even want to be forgiven - because I have to move on and not drag bitterness with me.