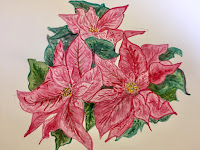 Several months ago, after my mother died, I decided to join a sketchbooking class in my village that was run by a local artist.  The reasons for this were that firstly I needed to do something to fill the "gap" in my life - I had spent so much time every week with mum and I needed to find other things to do in that time.  Secondly, it only really struck me after my mum died that I'd spent a lot of time supporting her, but that I didn't have a support system myself.  I knew that I needed to reach out to other people.  Thirdly, I thought that drawing would be a challenge.  Mum was a very good artist, and my daughter Rachel has obviously inherited that too.  I'd never really tried to learn to draw, so this was a challenge.  I started in July being given one thing to sketch every day - the idea was to spend 6 minutes every day sketching something that was suggested by our teacher.  After that we moved onto drawing things we were drinking and the following month things that were made up of circles.  The group then did Inktober, and finally at the end of the year started meeting in a garden centre where we sketched flowers and then Christmas items.  I'm not the greatest sketcher, but I have improved.

I was interested, therefore, to look at the Edutopia video about how drawing is a better way of learning than writing notes.  This was borne out by a study showing students who drew information remembered nearly twice as much as students who wrote things down.  This is because drawing uses visual, kinesthetic and linguistic areas of the brain all at the same time, which leads to more connections being built in the brain.   The video below gives 4 ideas for educators to incorporate more drawing into their teaching.