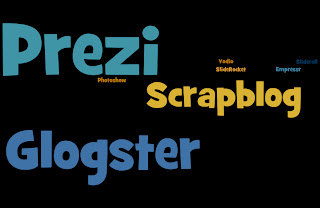 If you have been reading this blog over the past couple of weeks you will know that I'm right in the middle of Grade 7 MYP technology presentations where students to got choose any Web 2.0 tool they liked to try to teach Excel to a group of younger students. I have been recording which tools they decided to use and their reasons for using them. Today another 15 middle school students showed what they had been working on. Prezi is still the most popular choice, but this week many more students showed us that they were using Glogster and Scrapblog. In total our students have chosen 8 different tools, though Empressr, Slideroll, Yodio, SlideRocket and Photoshow have only been used by one student each (they are almost too small to be seen on the Wordle above).
What is influencing our students when they are deciding which tool to use? Well today some of the students told us that their final choices were not actually their first choices. Some started off using other tools and then changed mid-way through their creation. I was interested to know why they did this as the idea behind the design cycle in MYP technology is that they first needed to investigate and research which tools they wanted to use, and then later they were to come up with design ideas for up to 4 different tools before making a final decision as to which one they would take forward to the planning stage. To actually switch during the creation stage of the design cycle is not recommended, though the criteria do allow for the plans to be modified if necessary. The students who changed all told us that they had changed to something that was easier to use for them. In fact ease of use and time taken to create their presentations seemed to top the reasons for the students' choices, followed closely by the actual design features themselves. There was a big difference between those students who wanted to go for the simple, no-frills approach like Prezi, and those who wanted multi-coloured, multi-features of tools like Glogster and Scrapblog. So far 2 of our students have set their presentations to music!
This project has created a lot of dialogue among the students as to why they are doing what they are doing and how to make what they are doing better. I asked today's group whether they liked having so much freedom of choice and one comment was that if I had told them which tool to use instead of giving them a choice then I would have given them more help! For me, though this was a deliberate decision to step back and let them create whatever they wanted without a lot of guidelines. I wanted them to figure things out for themselves, to work independently, to come up with something that was unique and that they loved. The conversations they are having about design are amazing to listen to. They are learning so much more from each other than they would have if I'd actually "taught" them how to use the tools. They are experimenting and if they don't like the results they are going back and figuring out how to get things to look the way they want.
Now all I need is to find a couple of classes in the elementary school who really want to learn how to use Excel. Having the Grade 7s look at how these students learn using the presentations they have created will really be the icing on the cake. They will be able to see what they have done that works and what needs to be further tweeked. Again, they will learn so much more from these primary school students than they ever would just listening to my comments or receiving a grade from me.
Posted by Maggie Hos-McGrane at 9:50 PM