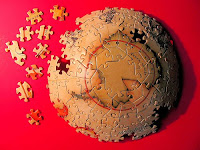 This week I've been dipping into some great blogs by Ozge Karaoglu where she describes great web tools to enhance collaboration. The quote below is taken from part 3 of these blogs and for me this sums up the amazing experiences our Grade 2 students are having as they talk and email with other students around the world to investigate how the weather is affecting people's lives.

Each of our Grade 2 classes has contacted 4 schools around the world. They have discovered by talking with students in South Africa and receiving emails from Australia that in the southern hemisphere it is summer. They have contacted schools in Canada and Alaska and discovered that they are right in the middle of winter. They have heard from students in India and Thailand and found out that places near the equator don't have a big difference between summer and winter and that the children there wear summer clothes all year round. Last week, while skyping with a school in Spain, I heard one of the students ask the question "Do you have a temperate climate?" and then went on to say "Well, I suppose you do as you just told us that you have 4 seasons".
This week the students came to the computer room to make graphs. They have been making daily records of the temperatures in the cities where the schools they connected with are located, and in their maths lessons they discussed what would be the best type of graph to show this data. I had started off thinking that we would have the students use 2Graph, but it became clear that they had already gone beyond that programme - some of the students had recorded the maximum and minimum temperatures in their location, and they needed a way to work out the average. We therefore decided to use Excel and this week all the students were able to print out their graphs to compare with the other groups in the class who were investigating other cities.
There has been so much learning going on in this unit. I think for me the best part has been just watching the students talking to other students using skype - they have learnt so much from these connections that they would never have learnt just by doing research using books or websites and they are excited to share what they have learnt from these students when we start making our VoiceThreads next week. We are hoping that students in the other schools will continue to collaborate with us and comment on the VoiceThreads too.
Photo Credit: Building the World by Batintherain
Posted by Maggie Hos-McGrane at 3:23 PM