Today was the day - we went out and flew our kites. When I arrived in the art room after lunch all the students were ready and waiting. I was a bit nervous as it didn't seem to be very windy and I wondered how successful we would be at getting the kites airbourne, but we trouped out to the playground, looked to see what direction the wind was coming from and then in pairs we launched them. 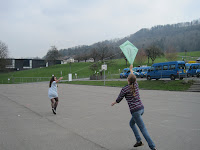 The students had to run in order to get the kites above shoulder level. We quickly discovered which designs would go up into the air and which would just spin around and eventually drop down and trail behind the students.
The paper kites didn't do at all well. I think many of them were too small and the students hadn't paid a lot of attention to where the strings were attached to the frame. 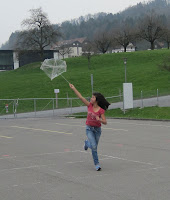 One of the most successful kites was made out of thin bamboo and covered with cling film. It was light enough to fly, but also strong. In general the kites made out of balsa wood had problems with the frames snapping. This kite was a hexagonal shape with a spider web shaped frame. 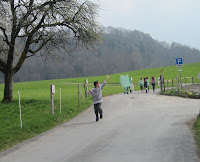 Because the playground is surrounded by tall trees on one side, we then decided to walk up to the top of the nearby hill and see if we could catch a bit more wind. This kite was very successful - it was made out of two pieces of balsa wood and was a sled kite design. 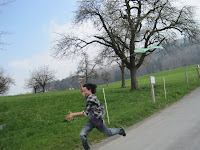 Some students tried various methods of getting the kites airbourne - running very fast downhill was quite a popular method! The traditional kite shape was a popular design. This one actually managed to get quite high. 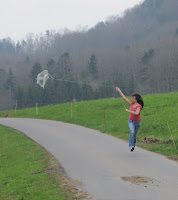 Generally a fun time was had by all, and now the task for the students is to evaluate their designs and suggest how they could improve them.
Posted by Maggie Hos-McGrane at 11:08 PM