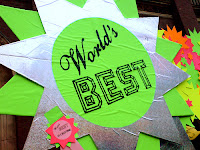 In the past week I have been to two award ceremonies: graduation which also included the secondary awards and prizes and a sports awards evening. At both these ceremonies there were a lot of proud students and a lot of proud parents, as well as students who hoped for recognition and were disappointed. The same was true last year when I attended my son's graduation at a different school.

Last year I remember discussing the choice of valedictorian with my son and a couple of his friends after the ceremony. The student who made the speech was definitely the student who was expected to gain the highest IB score - after all she had got a perfect score on her MYP just 2 years earlier. She had certainly worked hard over the 2 years of the IB diploma course. My son, however, argued that there were two other students who, in his opinion, deserved this title more. Both were also extremely hard working and exceptionally bright and were expected to do well. These students, however, were also more "balanced" - they had been involved in various sports teams, in community service, in school plays, house activities and so on - they had both added something to the school community rather than just using the school as a place for furthering their studies. Since balanced is one of the attributes of the IB learner profile, my son argued that the valedictorian should not just be measured on knowledge/grades alone. I have to say I agreed with him.

Yesterday I read a blog post called Death of an Awards Ceremony by Chris Wejr. Chris tells how his school has abolished the awards part of the end of year celebrations as his school's goals are to celebrate each student's talents and areas they excel in, rather than just to recognise the top academic or sporting students. In keeping with a lot of what I have been reading recently about motivation, Chris says that striving for excellent grades is extrinsic motivation, whereas focusing on the learning is intrinsic motivation. Awards ceremonies focus on the final grades, not the learning that has been going on and awards can act as demotivators to accepting challenges and taking risks (risk-taker being another attribute of the IB learner profile).

One of the things I have loved about working in an IB world school is what happens at the end of the PYP and MYP - the PYP Exhibition and the MYP Personal Project where every student is involved and their work is celebrated. I am always amazed to see what has sparked the interest of our students and what they have come up with as a result of their interests and ideas. Recently attending the Grade 10 personal project evening I was able to enjoy the achievements of a student who had learned to hang glide, a student who decided to train a horse, a student who made jewelry out of recycled materials and a student who had traced back her family tree. At our PYP Exhibition I learned about homelessness in Switzerland, the problems of smoking and how hard it is to give up, environmental issues and children's rights. Both these events allowed each and every student to shine in the areas they were interested in.

So for me, while it was good to celebrate the achievements this past week of some of our brightest students and some who had excelled at sports, I think there are better ways of recognising the achievements of all our students. I certainly agree with Chris Wejr when he asks: Why do we present awards to certain students? What does this do to help learning in schools?

Photo Credit: World's Best by Martin Deutsch
Posted by Maggie Hos-McGrane at 2:02 AM