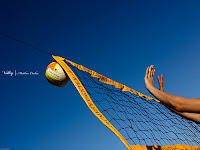 Three years ago our daughter started playing volleyball.  She was incredibly lucky in that she had the most amazing coach who told all the parents, right from the very beginning, that her whole aim that year wasn't to win anything, but to have the girls feel that they were part of a team and for the girls to love the sport.  She got the girls to buddy up with each other, so that each person not on court would be watching their buddy who was playing, and would later give that person feedback about what they noticed that they did really well.  She also organised socials for the girls so that they could bond.  And of course all this worked!  Our daughter grew to love volleyball and to appreciate her team mates and the team started to win.  Three years later, in another school, our daughter is co-captain of the varsity volleyball team.  I hope she has learnt a lot about team building from her old coach, and I hope she will put what she has learnt into practice with her new team.

As teachers we can all learn from this.  It's not the winning that's important.  It's the relationships, and it's loving the game.