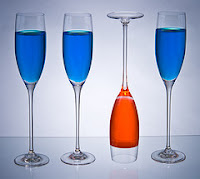 The first Valentine card I ever received was when I was 15. It was from a boy in a neighboring school and it had a picture on the front of it of a lot of blue birds sitting on a wire with one yellow bird. Inside he'd written "I like you. You're different.". I suppose in some ways that sums up my life really - though I would never have thought so at the time. Like most 15 year olds I didn't want to be different, what I really wanted was to be the same as my friends and fit in.

It took a few more years to really do something different, however. Like the rest of my friends I trained as a secretary and went on to do a series of short term secretarial jobs in London. But somehow I knew this wasn't for me, and to everyone's surprise I decided to go to university. I can remember the reactions from some of my old school friends in that year, some of them were getting married and doing very grown up things, and there I was going back to school. I'm sure most of them thought I was mad!

Some years later and armed with a degree I found myself again at a crossroads. While those in my graduating class were busy applying for "good" jobs, I still hadn't decided what I really wanted to do. I took off for Denmark for a while, then managed to get a job as a nanny in the USA, and finally ended up in India living out of a backpack and working for a local charity. While the rest of my class were power dressing in high heels, I was wearing flip flops and sending my few items of clothing to the dhobi waller where they would be washed and pounded with rocks in the nearby river. I did finally decide what I wanted to be, however, and returned to the UK as a teacher.

What followed were six fairly unremarkable years. Then one summer on a trip through Portugal I met my husband. To the horror of some of my friends and family I once again ditched my secure teaching job and set off overseas. Actually that was the making of me. I got into international education and have never really looked back since, but even so I wouldn't describe myself as a typical international teacher either. I moved from high school IB diploma into primary education as a homeroom teacher. I have abandoned the subjects I actually qualified in (geography and history) to now become a teacher of IT. And the way I teach has often been different from my fellow teachers too.

Why, I sometimes ask myself when I look back to my job as a grade 6 teacher 15 years ago, why on earth did I ever decide to start publishing my students' work on the Internet? At that time the school didn't even have an Internet connection, and more to the point I wasn't a technical person at all. And why did I start inviting those grade 6 students to come with their parents to the parent conferences? I'd never even heard of student-led or 3-way conferences - actually I don't even think that phrase existed way back then - but somehow it seemed like the right thing to do. And then a couple of years after that when I was an IT teacher I remember wanting to abandon the timetable and go for flexible lessons. Thankfully some teachers were also prepared to try something different and let me schedule their students flexibly. For all of us, in those days, it was a bit of a leap in the dark. And thankfully I worked in an amazing school where I was given the support I needed from the administration to try doing things in a different way. I guess they had a vision too and they realized that to move forward and to be cutting edge we had to take a few risks, do things differently and learn from our mistakes if they didn't work out.  That running in place on a treadmill and doing the same things over and over might feel safe and good, but that you have to step off the treadmill to really move forward.

In the past couple of years in IT I've abandoned teaching many of the traditional applications that used to be part and parcel of being an IT teacher (such as Microsoft Office).  Partly as a result of technical/network difficulties last year, I moved almost entirely to web based applications because saving was easier and because the students could easily access their work from any computer.  I remember part-way through the year a colleague saying to me, "These Web 2.0 applications are great .... but when are you going to teach PowerPoint?" and I can remember thinking that I would probably never teach it again.  One year on, I think that Web 2.0 is no longer viewed with suspicion by our teachers.  We still have a way to go before they will all embrace it - but we have come a long way.

Blogging is something else that I have used extensively over the past year (including micro-blogging with Twitter).  Again, this was partly a response to moving to a new school and needing to connect with other educators.  Blogging has allowed me to reach out to thousands of teachers worldwide who have provided me with different perspectives, invaluable support and feedback on my ideas.  Sometimes it has been easier to have these early discussions with educators that are at a distance from me, as colleagues can sometimes react in a negative way to new ideas and see them as criticism of the way they have always done things.  Sometimes I have needed to refine my ideas first, before bringing them back to school, and my PLN has helped me to do this.  At times it has helped to know that I'm not the only one trying these new things out - that others are using them with their students very successfully - and it gives me the motivation to try something different myself.

Now I want to encourage others to try out new things. This year 4 or 5 teachers have started blogging with their classes. I'm excited to see what they are doing. We've also introduced iPods and one of my colleagues is doing some great action research to see if using a handwriting application is helping students form their letters better when compared with just using a pencil and paper. We've also started using Google Apps for Education which is changing the way students work together. This year every single thing I've done with the students has been different from what I did last year (and that was also different from anything I'd done previously as I was in a new school).

It's not always easy being different and I suppose one drawback to always moving on and doing new things is that I often have the feeling that I never consolidate things - often I leave the consolidation for someone else. I've never wanted to move up the career ladder, I've always wanted to move on to teaching something new. The joy of my job is being with the students. I like my own path. It's not a very conventional one, perhaps, but it feels right to me because it's different.