Taking pictures with an iPhone

Today I decided to do an experiment.  I've been looking into apps for the iPhone and I wanted to use 3 different apps to take the same picture.  Since today is a Tuesday, and on a Tuesday I always work on another campus - with a staff room that must have one of the best views in the entire world - I decided to try out my new apps this morning.

I've been using Pano recently to take panoramas - many have turned out more successful that this one as I tend not to take them into the light.  This morning, however, I had no choice - the sun was rising and I was pointing the phone at it which meant I got some very odd colours in the middle of the shot.  Pano is easy to use as you get a faint version of the previous photo to match up with your next shot.  Of the 3 photos I took this morning, however, this was my least favourite. 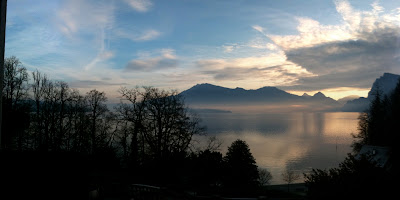 This is another app that takes panoramas.  It's ridiculously easy to use - just take a series of photos with the camera making sure there is some overlap between the photos, then open the app and load the pictures - the app automatically puts the photos together for you and you can crop out the edges that don't match.  Top marks for this one - but I still don't really like the contrast - the trees in the foreground are very dark compared with the light of the sunrise in the background.  I later went on to crop the panorama to give what I thought was a better composition. 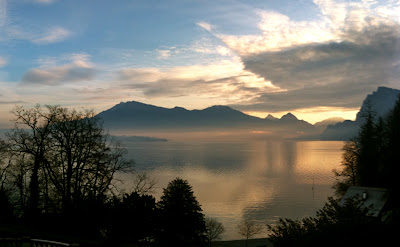 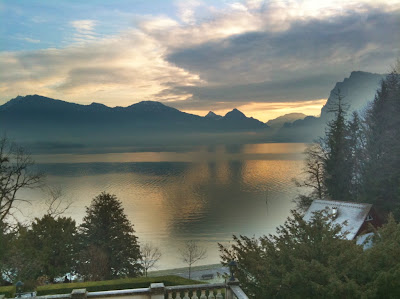 This doesn't take panoramas, but what it does do is to take 2 photos of the same scene and combine them so that the dark and light is more balanced in photos where there is a lot of contrast.  There is an Auto mode (which I used to take this photo) and also a manual one which I haven't tried out yet.  Once the 2 photos are combined you can still use sliders to adjust the brightness, contrast, saturation, warmth and tint.
Conclusion:  The photo that ended up most like what I was actually seeing was the one taken using Pro HDR, though I have to admit that I do like the silhouette effect of the trees and the colours using AutoStitch.  I thought both HDR and AutoStitch did a great job because I was facing right into the sun.  I was most disappointed with Pano - however I have used it to take great shots (just not looking directly at the sun).
Do you have any other apps you would recommend for using with an iPhone?  If so, I'd love to hear about them.
Posted by Maggie Hos-McGrane at 12:14 AM