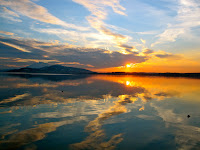 The Horizon Report identifies two technologies as being on the near horizon - which means mainstream adoption within the next 12 months.  These are electronic books and mobiles.

Electronic books:  these are a viable and easy alternative to printed books and according to Amazon more eBooks were sold last year than printed ones - despite this we still haven't seen such a big move towards eBooks in schools.  Electronic readers allow for audio-visuals and they support annotation and note taking, bookmarking and research activities, the ability to look up words in dictionaries and they can support social interaction by connecting readers with one another. By promoting new kinds of reading experiences eBooks are truly transformative technology, and almost everyone is able to access them with the electronic devices that they already have.  Advantages to students include the size and weight, the ability to include graphics and video and to be able to add commentary.  We're currently experimenting with iPads which combine book readers with web browsers and a variety of apps.

Mobiles:  these are now the primary means of accessing internet resources, however many schools still ban mobile devices in the classroom.  This technology is being driven by increased access and affordable and reliable networks - mobiles are computers and in fact the iPod Touches we now use with our students have more than 1000 times the memory that the desktop computers at our school had just 10 years ago.  The Horizon Report goes on to quote a study from mobile manufacturer Ericsson that suggests 80% of internet access will be from mobile devices by 2012 and that within one year internet capable mobile devices will outnumber computers.  The internet is no longer something that is piped into homes, schools and offices, it is now pervasive, ever-present and accessible from virtually anywhere.  Already iPads are used by some as alternatives to laptop computers and specialised apps are developing that replace a web browser.  Another big advantage of mobiles is that they allow simple tools to be integrated into classroom activities without the need for involvement of IT support staff.

I'm predicting that for us mobiles will become more important than eBooks over the next 12 months.  As most people know I'm not a fan of textbooks.  I taught the entire IB course without a printed book in sight by using digital resources and having the students create their own "pages" for the course using a wiki.  What I'm really waiting for is to get a set of new iPod Touches with cameras - I've been exploring numerous apps and would love to use these with our students next year.

Photo:  Sunset on the Zugersee
Posted by Maggie Hos-McGrane at 12:39 AM