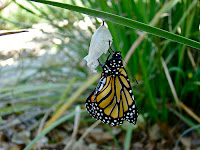 Change is one of the 8 key concepts in the PYP.   In Making the PYP Happen it states:

The early developers of the programme analysed curriculum models used in different national systems and in international schools. This analysis focused, firstly, on whether there was a consensus on a set of concepts in which each has universal significance, and secondly, on the role given to concepts in the various curriculum models. The developers concluded that there are clusters of important ideas that can be grouped usefully under a set of overarching or key concepts, each of which has major significance, regardless of time or place, within and across disciplines.

This concept was selected, not only because it is such a universal feature of all existence, but also because it has particular relevance to students developing international-mindedness who are growing up in a world in which the pace of change, both local and global, is accelerating.

What I've been reflecting on in the past few days is how in some schools where I've worked change has been rapid, and in other schools change has been very slow.  I've also been reflecting on what happens in a school when the person driving the change leaves - does the change continue or do things revert back to the way they were before?  Some changes are permanent - when you bake a cake, you can never go back to the original ingredients, when you mix red and blue paint to make purple you can never separate them up into their original colours again.  Some changes are temporary - a new idea comes along, for example a new maths programme.  It's used for a few years then something else comes along and it's changed.  Or the structure of a school changes, from quarters to semesters or to trimesters.  Or at one time it seemed a good idea to have a middle school, and then a few years later this changed back to a secondary school again.  Sometimes new people come along and want to make their mark - they make a change but because it is not part of the culture of a school when the person leaves it dies out.

As I've been thinking about this I've been reading Alan J. Daly's post on the Harvard Education Publishing Group blog entitled How Change Really Happens: The Hidden Potential of Social Networks (Alan J. Daly is an assistant professor of education at the University of California, San Diego).  Daly writes:


Although reforms are documented and monitored through plans and reports, change does not necessarily result from these formal plans and blueprints, but rather occurs in the interaction of participants. Change processes ultimately emerge and are maintained through interpersonal relationships, and it is the interdependence of relational ties that may ultimately moderate, influence, and even determine the direction, speed, and depth of a change.

When I reflect back at why it was so easy to change and move forward in previous schools I think it comes down to a few key points:


Sometimes change is irreversible - things change so much that it doesn't matter who started it or whether those people are still there - the change has become part of the culture, part of the mind-set.  Sometimes change happens because people have been forced to change and they have come to see the benefits - practice has changed and belief has followed.  Sometimes it's just that the caterpillar has turned into a butterfly and it's impossible to change back.
Photo Credit:  Butterflies by Emmanuelle Bourgue

Posted by Maggie Hos-McGrane at 3:01 AM