Save the Last Word for Me 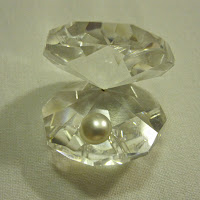 This week I've been at the PYP Regional Workshop in Paris co-leading the workshop Making the PYP Happen.  One of the sessions was on international mindedness and we asked all the participants to bring with them an artefact that would say something about themselves as a cultural being.  The idea we wanted all the participants to grasp was that international mindedness is encompassed by the IB Learner Profile.

To discuss our personal artefacts we used a strategy called Save the Last Word for Me.  The participants worked in groups of 5s and the artefacts were placed on a table one at a time.  Everyone, except the person who placed the artefact, discussed what they thought these objects said about the person.  Finally the person who has brought them got the last word and shared how the artefact reflected his or her identity.

I brought a crystal oyster with a pearl in it.  When it was my turn to explain how this was a reflection of me I explained that I was named after my grandmother and that my name means "a pearl".  I have come to see that there is a message in this:  an oyster makes a pearl to help it deal with an irritation, such as a grain of sand.  The oyster knows it cannot get rid of this grain of sand, so it has to live with it, and so gradually begins to cover the sand with mother of pearl.  Over time this ugly little grain of sand grows into something beautiful and valuable.  I feel I have to learn from this pearl, the thing I was named after - I need to think again about problems and irritations that are coming my way.  If I can be patient and accepting then I can change the challenges and irritations into something positive.