The Butterfly Effect of the 30 Goals Challenge 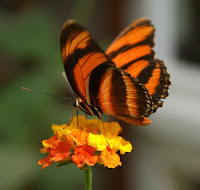 Although I've never met Shelly in person, I feel confident in saying she is one of the most inspiring educators on this planet!  I've connected with her through Twitter, by following her blog and watching her videos on YouTube - and today I got to attend her session on the 30 Goals Challenge at RSCON.  Shelly's presentation was moving - she speaks from the heart when she talks about her father changing the history of her family by ensuring all 5 of his daughters graduated from college and about how the 30 Goals Challenge has changed the lives of teachers and students worldwide.

Shelly started her presentation talking about how she first started the 30 Goals Challenge herself.  She mentioned that although she had only recently started blogging and using Twitter, she decided to make a list of all the goals she wanted to achieve and then share them online using social media with members of her PLN.  What started as 30 short term goals to be accomplished during January 2010, has since become a larger year long challenge for over 6,000 educators who work on 30 larger, practical goals during a school year.

Shelly talked about what she first called the ripple effect of other educators joining her - what she now terms the butterfly effect after reading about the MIT meteorologist Edward Lorenz who talked about small events having large, widespread consequences.  He suggested that the flapping of a butterfly's wings in Brazil might set off a tornado in Texas.

Shelly told us that as educators everyday we can make a change that can have a huge impact - we went into education because we wanted to have this impact, because we were passionate about change, because we believed that education could change the world.  Today, sadly, many educators around the world are burned out by policy, politics, bureaucracy and so on, and her wish is that by doing the 30 Goals Challenge we will rediscover our beliefs in our power to create change.  She pointed out that even if we achieve only a few of these goals, it's better than doing nothing.  She quoted from Sydney Smith:


It's the greatest mistake of all to do nothing because you can only do a little.

Shelly used social media as her way of reaching out to other educators to join her in her challenge.  She pointed out that 997,000 educators are using LinkedIn and that 2 billion people a day use YouTube - social media is a powerful tool for spreading your message.  Now Shelly has also written a book - to reach a different audience - the educators who don't yet use social media.  She describes the book as being like a work book, or a paper blog.

When Shelly first started her 30 Goals Challenge in January 2010 she used her blog and Twitter to reach out.  This year she has video blogged each goal and encouraged others to do the same.  Some educators have made podcasts about their goals and it's not just teachers - principals and students have joined in too.

Shelly's message to us all is Goal #30: pass on your passion.  We have the ability to touch not only students, but also parents, principals and politicians.

Posted by Maggie Hos-McGrane at 8:00 PM

Email ThisBlogThis!Share to TwitterShare to FacebookShare to Pinterest
Labels: PLN, Teaching and Learning