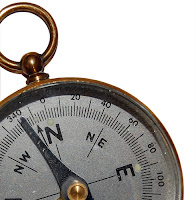 We did a really interesting exercise this morning called Compass Points.  We had to decide which of these styles sounded most like us and then move into a group with others that had made a similar choice and discuss the strengths and limitations of this particular style, which style we found most difficult to work with, and what we most valued about the other three styles.  We also talked about the best combination of styles for a group or team to have and how understanding the other styles of the members of our team could help us to work together more productively.  Here is a description of the styles:

I joined the North group and we talked about what the strengths were of our style.  We described ourselves as "movers and shakers" - we said that we got things done.  We had vision, were dynamic, were risk-takers and were often reflective (acting first but then going back and thinking about the consequences of these actions later).  We talked about some of the problems that this could cause, for example we can be impulsive and this can alienate others, we ask others to trust us a lot, and we could appear to be disorganised.  We talked about the quotation "imperfect action is better than perfect inaction".

Generally I thought the style I found most difficult to work with was the South style.  Sometimes I'm very impatient with people not getting on board with all the things that need to be done and changes that need to be made.  At times I certainly feel that I am putting too much effort into the "late adopters" and I need to put more into the "early adopters".  I recognise that the one dissenting voice, the one who doesn't want to change, might actually be the right voice in some situations.

Of course no-one is only one direction.  For myself although I joined the North group, I feel I'm actually more North-East as I think I am a big-picture person.  I also think I like working with people with the West style.  I think I like to leave the small details to others and so appreciate having them on the team.

Posted by Maggie Hos-McGrane at 12:34 AM