Could have, Would have, Should have, Didn't: The problem of procrastination 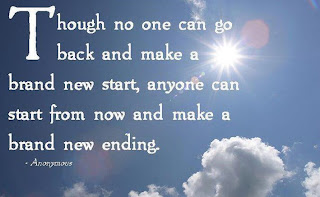 When I was younger I was much more spontaneous - when I decided to go and work in the USA, for example, I didn't think much about the decision, I just went down to Victoria train station and booked a stand-by ticket on Freddie Laker's Skytrain, which was probably the first of the low-price no-frills airlines. It cost me about thirty pounds.  I suppose at the time I thought that if things didn't work out I'd just buy myself another cheap ticket and come home.  At some point however, I started thinking more about the consequences of my decisions - this was probably around the time I had children and couldn't just consider myself.  Last year, when I considered moving schools, I spent months weighing up the pros and cons - and then eventually didn't move after all.  With hindsight I probably should have made a different decision.

As I'm reading on through Seth Godin's Linchpin, I'm now at the chapter where he writes about resistance, something he calls the lizard brain.  This is the part of you that wants to stay safe, and as such resists change.  It comes from our very early ancestors - from the time when survival was the most important thing.  What this chapter addresses is that survival and happiness or success are in fact two very different things.

Godin writes that the lizard brain is encouraged by schooling, where you are taught to be obedient and to fit in and to get good grades.  It's then further encouraged by working in places where you have to follow the rule book, where you do things because "that's the way we've always done it" and because you fear what might be up ahead.  Schools encourage the lizard brain because they encourage a fear of failure.  However successful people are successful because they don't fear failure, they know it is something to learn from:

Failure isn't easy.  Change is hard.  You have to let yourself get comfortable with being uncertain and uncomfortable.  But this is what Godin says about discomfort:


The road to comfort is crowded and it rarely gets you there.  Ironically, it's those who seek out discomfort that are able to make a difference and find their footing.  Discomfort brings engagement and change.  Discomfort means you are doing something that others were unlikely to do, because they're busy hiding out in the comfortable zone.

Later he goes on to write:


Fear of living without a map is the main reason people are so insistent that we tell them what to do.  The reasons are pretty obvious.  If it's someone else's map, it's not your fault if it doesn't work out.

When I left Amsterdam with my family and moved to Thailand we'd planned this move for 18 months and the children and myself had even started learning Thai. But we didn't sell our house in Holland and we made sure that we'd have a job to return to if we wanted to come back.  This is what Seth Godin calls Plan B.  As it turned out we didn't need a Plan B, Plan A was a great success - it was actually the making of my children.

At the crossroads in our lives it's often hard to make a decision.  Sometimes you reach the crossroads having travelled down a hard road, and still the lizard brain is saying " Don't be stupid, why change, why move again, why take the risk, why not stay somewhere comfortable, who cares if you have a lousy job, why not stifle all your ideas and principles, sit down, shut up, just fit in and stay safe?"  But what this chapter is about is not giving in to the resistance, not selling yourself short and slowly dying inside.

As a technology teacher it's easy to reject that way of thinking.  We have to change.  Each year technology is moving so fast that if we don't jump into the stream and swim with the current we will be left very far behind.  Yesterday I looked at a school website and found their IT programme - I saw that they were still teaching PowerPoint.  I quickly closed the window and moved on.  Change means moving from the known to the unknown.  That might be dangerous - but it might also be exciting.  Certainly I don't remember my students ever getting excited about PowerPoint in the past, but I do see them getting excited by some of the different Web 2.0 presentation tools they are using now.

In this chapter Godin makes a list of things that people do when they are procrastinating instead of moving forward.  These include:

The image that accompanies this post was taken from a friend's Facebook wall.  As I read it last week I started to think about why, when people say "If I'd known then what I know now I'd have done it all differently" they then keep going with the same old thing.  Again, it's the lizard brain, the fear taking over.  The final part of the most recent chapter I've read in Linchpin is all about fear and anxiety (and the difference between them).  Godin says "Anxiety is practicing failure in advance".  A very good friend of mine suffers terribly from anxiety.  She tells me she sometimes wakes up suddenly in the night worrying about anything and everything - did she lock the front door, did she turn off the pump in the garden pond? - she is anxious about all the things that could possibly go wrong or as Godin puts it "the future that's not going to happen".  Godin writes about the difference between fear and anxiety - fear is of a real and present threat and you should pay attention to it, anxiety is fear of an unknown threat or future and doesn't protect you from danger but paralyses you and stops you from doing great things.

So how do you deal with procrastination and with the anxiety that is stopping you from doing all the things you could or should do?  Godin tells us we need to sit with it, acknowledge it and let it burn itself out.  He says we should not scratch the itch.

So, after all these thoughts, where am I now?  For a start I think I'm done with procrastination: I realise I need to make a brand new ending and move in a different direction.  It seems that for a couple of years now I've been pushing a rock uphill.  I get it a little way and then it rolls back down again.  I'm worried that pretty soon this rock is going to roll right over me and flatten me!  Now I know I need to start in a different place.  I need to start at the top of the hill and to push the rock down so that it gathers momentum as it moves.  And to do that I need to go and find the right hill to push it down and the right people to help me push it.
Posted by Maggie Hos-McGrane at 4:30 PM

Email ThisBlogThis!Share to TwitterShare to FacebookShare to Pinterest
Labels: Linchpin