Courageous Leadership: Sailing into the Unknown 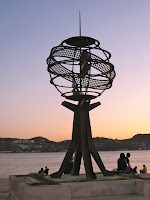 Courageous leadership was the theme of last month's ECIS Conference in Lisbon.  Right from the start, with the opening remarks before the first keynote speaker, it was clear that this theme fitted perfectly with the location of the conference.  The Portuguese led the Golden Age of Discovery in the 15th and 16th centuries.  Starting with Henry the Navigator, courageous explorers sailed out into the unknown and explored first the coast of Africa and then eventually rounded the Cape of Good Hope and reached India.  Ferdinand Magellan led the first voyage around the world and the Portuguese were the first to sail to Brazil and Japan.

Why did they do this?  Why did these Portuguese explorers set off into the unknown?  Was it something to do with dreaming of a better world and a belief that they could make this happen?  Is this a belief or a dream that we, as teachers, share today.  We have no real idea of the future we are preparing our children for.  We, too, are sailing into the unknown.

At an international schools conference, it's clear that teachers have many questions about what it means to be international.  In a previous post I reflected on the fact that an international teacher is not necessarily a global educator.  That many teachers who have never left their home country are now reaching out with the help of the internet, smartphones, iPads and so on, to people in other countries with different ideas.  These teachers are also global educators.

Hans Rosling, the keynote speaker on the first day of the conference, talked about how, with the rate of population growth accompanied by an increase in health and wealth, this is already an Asian world.  The "Old West" will only make up 10% of the estimated world's population of 9 billion in 40 years time.  Our world view, still dominated by the North/South divide from the 1970s and 80s, needs to change.  Asia is the world - probably the most exciting changes are taking place there.  Are we educating our students for this new reality?

Just as the past explorers set out with their navigation devices - the cutting edge technologies of their day - so we as teachers are setting out with our new digital technologies as we sail into the unknown.  We know we need to shift to more future-focused schools - we are leading this change in the best ways we know.  Arne Bieber, Director of the International School of Prague and outgoing Chair of the ECIS Board of Trustees, talked about the main thing getting in the way of these teacher leaders:  time.  He spoke about the way that Google has given its employees 20% of their time to think big and reflect and said that schools need to give teachers the time to think and empower them to experiment and take risks.

There are schools that are redefining learning in the 21st century.  There are teachers who are doing this one classroom at a time.  I'm excited about what the future will bring with these courageous leaders.