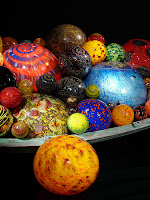 Recently I was visiting some friends who are also teachers who got me thinking about the words "21st century skills".  It's interesting to question whether, at this point just 11 years into the 21st century, we really know what skills student will need to be successful in the future.  My friends asked me if 100 years ago, in 1911, teachers could have predicted the skills that their students would need to be successful at the end of the 20th century.  I thought that probably they could not have done this.  This year the oldest person in my family died at the age of 98.  She was born in 1913 and certainly wasn't given at school the skills that she developed in the last years of her life to use a computer or a smartphone.  Something else kept her going, however: curiosity, open-mindedness, adaptability and the courage to try new things.  These were the attributes she developed as a young person at school in the 1920s and these are  the same skills that nowadays we are labeling as "21st century"?

The first half of the 20th century was marked by a very fast pace of technological inventions.  People flew in the first airplanes and helicopters, they started to own their own cars.  Motion pictures, radio and television were invented.  New materials such as stainless steel, nylon, plastic and teflon became commonplace.  In the 1950s, just halfway through the century, televisions started to appear in many homes as the dominant media, which changed people's ideas of entertainment, and people started to go into space for the first time.  It's almost unbelievable to think that at the beginning of the century, when human flight was unthought of, anyone would have predicted that men would be able to walk on the moon or live in space.  In an age where many people's working lives were spent in local small businesses or factories, who could have predicted the rise of the multi-national corporation?

In the final chapter of Curriculum 21, Arthur Costa and Bena Kallick write:


Our students are in the 21st century and they are waiting for the teachers and the curriculum to catch up.

They refer to the changes that need to be made such as:


open-mindedness, flexibility, patience and courage.  Changing curriculum is about changing your mind first and then forming some new habits and routines as you abandon old ones.

21st century skills have been defined in many ways and include the following:


As I looked over this list I asked myself, were not these also the skills employed by the Wright brothers as they designed and tested their first airplane, or by Albert Einstein when he published the theory of relativity, or by Thomas Edison, one of the most prolific inventors in history?

Costa and Kallick have defined 16 habits of mind necessary for success.  These are:
Costa and Kallick point out that these habits are never fully mastered, instead learners must continually practice, modify and refine them.

Growth and change are found in disequilibrium, not balance.

Posted by Maggie Hos-McGrane at 3:15 AM