Pre-K play on the racetrack

Last week the Pre-K teachers asked me last week to see if I could find a suitable "Formula 1" video for their sight and soundscape wall.  Again I found one and put it on Infinite Looper so that it would form a wall of sights and sounds when projected.  This morning I was able to observe what happened in one Pre-K class as this was played. 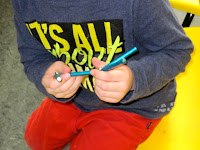 The first thing I noticed was that a group of boys took some chairs and placed them in front of the wall, set up as if they were in a car (though not in a racing car with just one seat!).  Then I noticed that some were pretending to steer the car and others actually took some of the construction materials and started to build themselves a steering wheel. 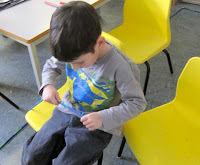 Another very interesting thing I observed was that one student decided he needed a seat belt - so he made one and strapped himself to his seat.

I have also managed to find a great time lapse video of a Chinese hotel that was built in 2 days (46 hours) and next week I'm planning on seeing how this works with some of the construction materials in front of it and how this encourages the students in their play.

If you would like to use the Infinite Looper movie that we used here's a link to it.
Posted by Maggie Hos-McGrane at 2:54 AM