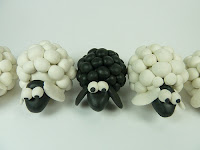 Seth Godin says "bravery in school is punished, not rewarded."  In some schools I would say this is true, others I've worked at have encouraged risk-taking, which after all is one of the attributes of the IB Learner Profile and applies to administrators, teachers and students.  Risk-taking can both be modeled and taught.  If students see a teacher taking a risk, trying something new, and if they see that this sort of risk-taking is not supported, the message they will get is that it's bad to take a chance or to stand out.  On the other hand, if students see their teachers taking risks and trying new things and the attitude of the school is more of a "can do" one which supports and pilots new initiatives, students will learn that they are masters of their own destiny.  All too often schools are telling students that there is one road, or maybe one map, that they have to follow in order to do well and be successful.  This is why Seth says schools are "stealing dreams".  If we stick to the one map we are "denying opportunities for greatness".  He writes:


To go off the path is to claim responsibility for what happens next.

He urges us to refuse to be sheep.  To speak up, to connect, to lead.  To be responsible for our own words  and actions.

When I read Seth's manifesto it takes me right back to the time when I decided to become a teacher.  I'd tried a number of other things before this, starting with part-time jobs while I was at school and university - most of which were boring because I was just an "interchangeable worker".  Somewhere along the line I decided I no longer wanted to be a cheap, compliant worker who followed instructions.  Teaching, it seemed, gave me the opportunity to be something different.  And in most of the schools where I have worked I would say that this spirit was encouraged by the leaders of those schools.  At others I've known I was an interchangeable worker as teachers were told "if you don't like it, get off the bus" - someone else would step into our shoes - we wouldn't even be missed!

When I first started teaching, in the 1980s, the role of a teacher was very different to the potential of what that role can be today.  I started working with children with learning difficulties and right from the start I had to write my own curriculum to meet their needs.  Somewhere along the line, when I moved into more mainstream education, I had to follow certain a certain curriculum because students were sitting for external exams.  As a teacher in this respect I was definitely what Seth refers to as a "source of answers, a gatekeeper to resources."

Teachers are no longer these things - the internet has made these roles unimportant - anyone can look up anything.  This is how Seth defines the new role of teachers:


... someone to persuade us that we want to learn .... and someone to push us or encourage us or create a space where we want to learn to do them better ... we can amplify each kid's natural inclination to dream, we can inculcate passion in a new generation, and we can give kids the tools to learn more, and faster, in a way that's never been seen before.

I think this is the thing I've been trying to do for almost 3 years but I feel I haven't really made much headway, though I feel I've sown some seeds of change in the way technology has been viewed and used.    However change is not something that everyone embraces because change is a threat to people's competencies - change threatens to make them less competent - and for some people it's very important to look competent.

For myself I don't feel that I have to look competent all the time, but I do feel that I have to try out new things and learn from them.  As an IT teacher, for example, I'm always trying out something different.  I try not to do the same things with each class in a grade, but sometimes it happens that I end up doing just that.  The first time I try something new it probably doesn't work out exactly as planned, but I reflect on what I've done and what went wrong and I learn from that.  The second time I try this with another class I've ironed out some of the glitches and things go much better.

Stop Stealing Dreams is an important manifesto, I've come to realise, because it doesn't just apply to the students but to the teachers as well.  Many teachers start out in an idealistic way and want to bring about change - sometimes these dreams die because of a teacher's experience at a school that doesn't value change.  As an educator I've tried to hang onto these dreams, and now I'm going to move to a school that is dreaming these dreams too.

Posted by Maggie Hos-McGrane at 6:29 PM