Hyperconnected and Always On 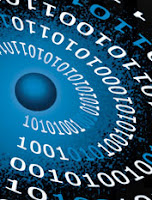 Dr Rosen produced a really interesting graph showing these waves and how they cross each other.  He pointed out that at times in history where these waves crossed there has been chaos, social unrest and so on.  We are currently in the middle of these last 3 waves crossing.

Today I dipped into the Pew Internet survey 2012 which talks about another generation which is dubbed Generation AO - always on (click here to download or read the full report).  This is actually a future generation since the report was looking at those who will be teenagers in 2020.  This fifth report from the Pew Research Center refers to the benefits and challenges young people will face as a result of being "always on".  Benefits cited are that teenagers will be nimble, quick-acting multitaskers as these young people will have grown up in a world that has instant access to the entirety of human knowledge and the ability to connect, create and collaborate.  Challenges cited in the survey are the inability of young people to focus their attention, be patient and to think deeply as well as a thirst for instant gratification and the desire to settle for quick choices.

The survey did come up with the most desired life skills for young people in 2020.  These include:
The clear message behind the survey is that positive changes will come about through formal education systems changing to take advantage of the fast-changing digital-knowledge landscape.

There was an interesting section in the report about multi-tasking.  In his presentation Larry Rosen referred to this as task-switching and he noticed that even computer programmers only stay focused for an average of 3 minutes at a time.  He pointed out that our generation was raised to do one thing at a time, but young people can do many things simultaneously and task switch.  On average they can do 6 or 7 things at the same time while we can do only 4 - this is because they use different parts of the brain to do different things.

Larry Rosen talked about the fact that he is seeing mostly positive effects of using technology with the iGeneration and Generation C.  He said these young people are believers:  they believe that anything they believe in can be done.  They trust everyone and also trust themselves.  They are liberal and idealistic, they believe in equality and love working in teams.  He said they have a strong work ethic.  He also talked about the fact that these are the most close-knit generation with their families, but did agree that patience is not their strength.  With regard to social media he also felt the results were positive.  He pointed out that students use social media to talk about who they are and from a developmental point of view this is positive.  They constantly change what they post and also post about things such as their philosophy and about people who they admire.  He points out that these are conversations and that they go back and forth.

So being hyperconnected and always on isn't such a bad thing after all - however as teachers it is our duty to transform education so that we are meeting the needs of these new generations of learners.

Image taken from Pew Internet Report Imagining the Internet
Posted by Maggie Hos-McGrane at 2:07 AM