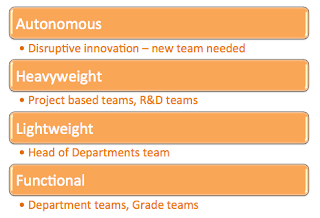 In the final chapter of Disrupting Class, Clayton Christensen discusses the most effective teams and structures for innovation.  He argues that while most schools are built around functional and lightweight teams, such as teams of teachers who teach the same subject or grade, or perhaps teams of team-leaders, these are merely functional teams which do not really need to coordinate their activities across departments, divisions or campuses.  Some teams that plan activities that are school wide (for example writing in all subject areas) are also lightweight teams.

The problem with the first two teams is that they are unable to tackle what Christensen refers to as "architectural change".  Examples of this sort of change include new roles for computers, project-based learning, changing the schedule and so on.  He maintains that new initiatives often fail because school administrators do not allow the setting up of heavyweight teams that completely redesign the school to take account of these new trends in education.  Often the existing lightweight and functional teams in schools don't really fit with children's different needs, however in general elementary schools are more likely to accommodate these because of the more flexible nature within the classrooms, than secondary schools where everything is more rigid.

Christensen's real argument is that in order to customize learning for each child, new autonomous teams will need to form in order to institute the student-centric technologies that are so vital for this customization.  He also warns that these autonomous teams need to be flexible enough to recognize that while project -based learning, for example, might be ideal for a student in one domain, that it might not be suitable for the same student in a different one.  The idea of autonomy is interesting because it extends beyond the school. Christensen writes:


A student-centric curriculum achieved through the implementation of computers can transcend the school boundary.  As schools implement this disruption, the way schools are organized and the roles and training of teachers may very well have to be rethought as well.

Above all, Christensen argues, school principles can "organize schools within schools to create space where heavyweight teams can have the power and authority to rethink the architecture of the curriculum" and cautions "we are not engaged in an effort to find a single best architecture that fits all students."

I got really excited when I read that because what I noticed when I visited my new school in February was that it seems to have set up heavyweight R&D teams to investigate various aspects of cutting-edge 21st century education and how they can work for different groups of students.  In addition I get the impression that the parents are really on board with this as a result of the parent education through the ASB Online Academy.  All too often parents have a "conservative" idea of what a school should be based on their own successes in coming through a traditional school system.  The ASB Online Academy appears to be opening doors to these parents to show them a different vision of education and is giving them new ideas about the ways that can best meet the needs of all learners.
Posted by Maggie Hos-McGrane at 12:21 AM