What's out there on the Far Horizon? 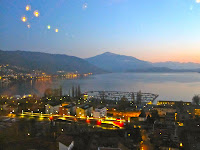 In education it's often been easy to predict what schools are going to look like in 4 or 5 years time (traditionally not much changes), but with technology it's more tricky to know just what's coming.  Three years ago, for example, nobody could have predicted the way that iPads would be finding their way into homes and schools.  I was interested to read the K-12 Horizon Report about what trends are predicted to have an impact on education in 4-5 years time.

Augmented Reality - the layering of information over 3D space - is becoming more important as we shift from desktops to mobile devices.  One example of this is students using AR applications when visiting historic sites so that they can see how the location looked at different points in history.  The Horizon Report notes that interacting with virtual objects can bring underlying data to life and can be brought into a student's personal space at a scale and in a form easy to understand and work with.

Natural User Interfaces - a number of devices already exist where users interact with them through gestures (for example the Wii, iPhone, iPad and so on).  The Horizon Reports sees a fast growing array of alternative input devices that allow computers to reognise and interpret physical gestures and voice as a way of control so that you can interact naturally with your devices.

Semantic Applications - have great potential to be used in schools in the future.  These applications make connections and meaning between the information on the internet so that students can more effectively search and gather relevant information.  This will become increasingly important as the amount of information continues to grow.  Wolfram Alpha and Siri are examples of semantic applications.

Tools for Assessing 21st Century Learning Skills  - the Horizon Report realizes that there is little research in this area, but writes that such tools could synthesize information to produce an accurate and relevant profile about a student's performance, behavior and  skills.

Over the past year, as I made up my mind to leave my current job and look for a new school, this 4th trend has been uppermost in my mind.  How are schools assessing 21st century learning?  Do such tools exist?  As I'm moving to a new school that is at the forefront of 21st century education, I guess I'm about to find out!

Photo:  View of the harbour, the Zugersee and Mt Rigi
Posted by Maggie Hos-McGrane at 9:21 PM