Dream big, work hard, be worthy of your advantages 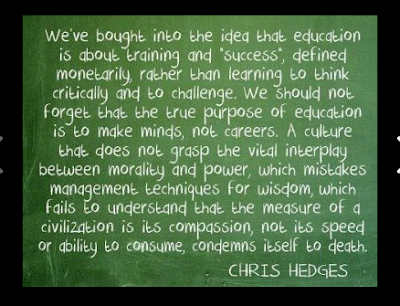 My daughter graduated last week and I liked the fact that in his speech her high school principal stressed that success was not measured simply in academic achievement, but also in being an all-round, balanced student.  Recognition was given to playing on the sports teams, to students who had gained the international award and those who had been involved in service to others.  I sat in the theatre for over 2 hours listening to speeches and waiting to feel - something.  Inspired, proud, sad perhaps now that Rachel is leaving school and setting off for university.  I've sat through over 20 such graduations before including my son's - and this could well be my last one.  I wanted this to be special.  But actually it wasn't.  I felt incredibly sad when I heard some of the limited ambitions of the graduates and their future dreams ("I want to sit on a beach drinking cocktails",  "I want a job where I don't have to work hard but where I can earn lots of money." etc).  After 15 years of education I would have hoped for better from them.  There were a few that were inspiring (one student wanted to set up a rugby club in a developing country, one said he wanted to have a happy family, one aims to be a doctor, another a marine biologist and so on).  But in general I was uninspired.  So much was about what they could get, not what they could give.  I searched hard in the speech the students made to find any reference at all, no matter how small, to how they were exhibiting the attributes of the learner profile, of international mindedness - after all this is the aim of the IB programmes - but much of what I heard was trite and ironic and incredibly shallow.

Then on Twitter I found another commencement address, this one from Wellesley College where the students were told they were not "special", that the world didn't owe them a living - that a good life is an achievement and not something that just falls into your lap.  That the purpose of education is not for material advantage but for "the exhilaration of learning".  That you should do the things you do because you love them and know that they are important, not because you hope for material advance or status.  That you should not focus on what good things will come to you, but on what good you can do for others.  This speech was about character and about the need for action.  It was about not waiting for inspiration and passion to find you, but accepting the challenge and going out and finding it for yourself.

Having listened to a number of speeches over the past couple of years when we have been told we are "one of the best" international schools, it was refreshing to hear that this phrase defies logic.  There can only be one best - and this accolade is vague and unverifiable.  You are either the best or you are not.  It's not something that I am really interested in, either as a parent or as a teacher.  Our daughter  recognizes that she has benefitted tremendously from her international education - even though for her it has been hard to move around.  In particular her 4 years in Thailand have shaped the person that she is today.  I'm hoping that the time she will spend in India before going to university will be another such character-building experience for her.

I saw the above graphic on Facebook this week too - posted by one of my friends.  Another good reminder of what the true purpose of education is:  critical thinking, challenge, compassion, morality and wisdom.  You can't measure "the best" in these, you can't give out awards for them, but as a mother I'm hoping that she has developed these in full measure.  I have done my best to model for her that trying to be someone else is a waste of the person you are: you have to be true to your core values and not compromise yourself to fit in with the people around you, if others don't accept you that's ok, you are not trying to please everyone.  I want her to know that giving up doesn't mean you're weak - sometimes it means you are strong enough and smart enough to let go.  (Thanks to Marc and Angel for their inspirational thoughts and writing that led me to accept the truth of that one).

We're moving on, we're letting go.  The countdown is on.  Just one more week.  We're dreaming big, we're working hard, we hope we're worthy of all that life has bestowed on us.
Posted by Maggie Hos-McGrane at 7:08 PM