Why we don't need more PD 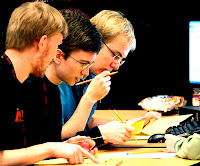 At the ISTE conference another session I attended was with Sylvia Martinez, the President of Generation YES. Sylvia spoke about teachers who won't use technology and asked why. Often it is because the technology they have doesn't work for them. They want something better for their students. Everyone assumes that given more PD they would be more confident in deciding to use the technology, but Sylvia argued that this os often not the case. They don't want more PD, what they need is the right support when using IT. With traditional PD, teachers learn something in a workshop, but where they need to learn it is in the classroom. Over and over again I've seen training, for example on how to use a SMARTboard, that doesn't lead to changed pedagogy in the classroom. It's simply a matter of doing old things in new ways. Supporting teachers to use technology to change their practice and to transform rather than simply enhance learning needs to happen in the classroom. Teachers often need to learn alongside and at the same times their students before they are able to use the IT themselves. Research has shown that training at the place of practice, supporting teachers in their classrooms, is the most effective form of PD.

How can we do this? The answer seems to lie with team teaching or action research, which involves learning while you teach and reflecting on what you have done. Another model advocated by Sylvia is to train students to provide technical support for teachers. Students appreciate playing such an important role as ambassadors for tech use and at the same time this models collaborative learning. Since over 90% of people in schools are students, training them to assist and teach teachers could be more effective than spending money on outside PD. Students can be involved in building the vision and striving to achieve it. In schools that are successful with using technology it is to be expected that tech support issues will increase, and students can step up as volunteers to the "tech genius" bar.

Sylvia made the statement that you can't empower students without empowering teachers. Generation YES appears to be doing just that.

Photo Credit:  Four heads are better than one by Nic McPhee, 2006

Posted by Maggie Hos-McGrane at 7:33 AM

Email ThisBlogThis!Share to TwitterShare to FacebookShare to Pinterest
Labels: PD