Virtual Spaces: One Life or Two? 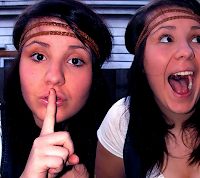 Yesterday I spoke to a group of students about some inappropriate comments that had been made online and forwarded on to me.  The students were embarrassed that something that they thought had been a private conversation ended up being viewed by adults who were not a part of it.  As I was thinking about this later, it occurred to me that there are many people who view conversations that I am having, that are also not a part of them.  These could be friends of friends on Facebook or anyone who happens to read something I post on Twitter.  This led me on to thinking about my conversations that are viewed on Facebook by all those people who are my friends, but who don't necessarily know each other - people who have known me in very different times, situations and circumstances.  For example there are my immediate family, friends that I knew when I grew up in the UK, colleagues from when I worked in Holland, Thailand and Switzerland who are now scattered all over the globe and so on.  All of these people knew me in slightly different ways - and yet these personal identities merge in some way online - and some people who thought they knew me in one life, suddenly find they don't necessarily know me that well in another.

In his book Digital Community, Digital Citizen Jason Ohler writes about 4 kinds of virtual spaces, each of which are characterized by different modes of communication:


The interesting thing is that these spaces are not mutually exclusive - emails can be forwarded to others, videos can be posted and commented on, people may choose to reply privately to something that is posted publicly and so on.

Young people sometimes have a hard time sorting out what is appropriate in each of their virtual spaces - and understanding that what's posted online in a private space can easily become public.  Sometimes it's a hard lesson to learn - that you are responsible for what you say.

Posted by Maggie Hos-McGrane at 10:15 PM