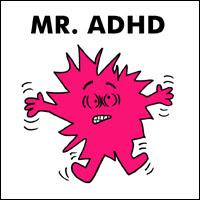 Yesterday I attended TEDxASB where there was a talk about ADHD by Dr David Sousa.  He explained that ADHD is a condition that is often undiagnosed, misdiagnosed and over-diagnosed.  Attention is important as it is a major contributor to our ability to learn as we need to block out things that are irrelevant, orient ourselves towards useful inputs and decide whether or not to respond.  Dr Sousa remarked that ADHD is probably genetic and that is is a spectrum disorder so it is possible to learn to adapt to it when it occurs at low levels.

Although attention is important for acquiring information and skills, Dr Sousa argued that we jump too quickly to the conclusion that a misbehaving student had ADHD.  He shared the following facts regarding children diagnosed with ADHD in the USA.  In 2003 7.8% of children were diagnosed with ADHD, in 2007 just 4 years later this had jumped to 9.5% and by 2010 18% of children were diagnosed as having ADHD - this is a huge amount - over 10 million children!

If ADHD is being over-diagnosed what else could produce ADHD-type behaviour:


As a parent I can relate to all of these as my own son was diagnosed with ADHD when he was in primary school and we were offered Ritalin, which we declined.  We instead worked with the school counselor and looked very carefully at his diet.  Our son learnt to manage.  Later, when he got to Middle School, he was fortunate enough to be in a special needs programme that gave him a laptop - he has never looked back since.  When he was 17 our son was re-evaluated because we wanted to see if it was possible for him to take his exams using a computer as he'd been using one in school for the previous 6 years.  This time the diagnosis wasn't ADHD but it was discovered that he actually had a writing disability, which seemed to have been solved by giving him a computer.  We were extremely grateful that we hadn't taken the drug route, and that he'd been part of the special programme to use a laptop and then later a tablet.  He didn't have ADHD but instead had a writing issue that was interfering with his ability to document his thoughts, which then led to frustration and symptoms of hyperactivity in primary school.

While there are many children who do suffer from ADHD, my own experience would lead me to agree with Dr Sousa - that we should look at all other possibilities first, before making a diagnosis.

Posted by Maggie Hos-McGrane at 10:34 PM