Piggy in the Middle 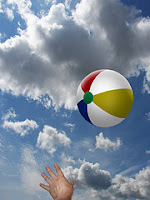 When I was a child we often played a game called Piggy in the Middle.  It could be played with any number of people who passed the ball to one another while the person in the middle tried to catch it.  I've also heard it used to describe someone who "sits on the fence" in an argument - who doesn't want to agree with either side.  As I was thinking about this today, it occurred to me that this is a good description of what a lot of students go through in Middle School:  they constantly feel like they are the Piggy.

However many educators would argue that the ages of 11 - 14 are a very special time in a young person's life, as they leave childhood behind, and this leads to the need for a very special type of school.   Puberty has a great impact on the social, emotional and intellectual development of teenagers.  Thomas Armstrong, in his book The Best Schools, argues for "the establishment of a mentor relationship between teacher and student, the creation of small communities of learners, and the implementation of a flexible, interdisciplinary curriculum that encourages active and personalized learning."  That sounds to me very similar to the aims of the IB MYP, which is the curriculum that has been adopted by 3 out of the 4 international schools where I have taught.

One of the most important tasks of young teens is to form their own identity.  During these years they struggle to find out who they are and what their value are.  Armstrong has identified some best practices  in Middle Schools to encourage this personal growth and development:
Photo Credit: digikuva via Compfight cc
Posted by Maggie Hos-McGrane at 10:14 PM