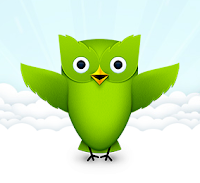 I'm visiting my son in London and noticed that he has started learning Spanish using the iPad app Duolingo.  Since he had some rather interesting remarks to make about it, I thought I'd share his opinions about how he has been able to start learning a language using this free app.  A bit of background:  Joal was born in Holland, went to high school in Thailand and university in the UK.  He studied Spanish for 4 years while in secondary school.

"I wanted to started learning a language a couple of years ago because I realized that since living in the UK I was losing my Dutch, and then I reflected that I'd already lost my Spanish and Thai languages completely.  I put it on my list of things to do - to relearn Spanish, or to become fluent in 3 languages again.  I started using Duolingo after looking at a TEDtalk by Luis von Ahn who created it (see below).  He also created reCAPTCHA, which digitizes books by giving you one word created by the comptuer and a second word from a book that the computer was unable to decode.  Up to this point I'd found that learning languages in the traditional way was boring and did not engage with the way people learn.

"When Luis von Ahn explained about the launch of Duolingo, he explained that it would start with Spanish and I though it was a great opportunity to re-learn my Spanish.  I started with Duolingo 2 years ago in Hong Kong using a laptop, but gave up after lesson 2 because I found the interface of dragging words across with my mouse cumbersome.  However, a couple of months ago it was launched on the iPad and my experience has been that it is so optimized for the iPad that it made so much more sense.  It's what textbooks should have been for Spanish, and it is much more interactive.  Now after 10 days I'm already on Level 6, I've learnt around 150 words and I would say I am much more familiar with my Spanish now than I ever was when I was in school, where the word I heard most was "basta" (shut up).

"Of course it's very difficult for a teacher to teach 20 different students and have them all progress at the same time.  Some of my classmates had been in the class for 4 years and others for just 3 months.  It was an impossible task for the teacher to teach some students at a basic level and at the same time engage those who already knew the stuff.  Everyone was learning at different speeds for different things - grammar, verbs, learning new words and so on.  What I found was that I'm OK at verb conjugation in Spanish and getting the sentence structure correct, but the problem for me is remembering the vocabulary.  For other people it could be the opposite.

"The way that Duolingo works motivates me because I get rewards for coming back each day and for getting though lessons without making mistakes and losing lives - the gamification also means that the lessons are never longer than 10 minutes so I can do a quick lesson in between other things.  I usually do it just before I cook dinner as that's where it fits into my schedule.  I also get an email if I haven't done it during the day so when I get home and see the email it reminds me that I need to do the lesson.   I also use Duolingo on the train and find it engaging and fun, and at the end of the day I have the reward of learning a language that I want.  That time may otherwise have been spent playing Angry Birds!

"It's something I can see being used in classrooms more often so that the teacher doesn't have to go through grammar and vocabulary.  You can do lessons at home with the flipped classroom model and then the teacher can act as a sounding board and to reinforce a couple of rules in class.  Teachers can have students as friends (though it works via Facebook so not suitable for younger students) and so can monitor progress via a leader board."

I tried the first lesson in Spanish and got on reasonably well.  I am now wondering when the Hindi version of Duolingo will come out.  I think learning a language with a completely different script may well be a bit more challenging (I also learnt some Thai, but only to speak it and never to read or write it).  At the moment Duolingo offers lessons in Spanish, English, French, German, Portuguese and Italian.

Posted by Maggie Hos-McGrane at 2:49 AM