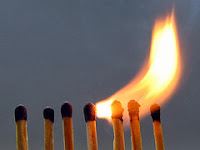 About 3 years ago, some months after I'd started writing this blog to reflect on my thoughts about integrating technology into the curriculum, an administrator at my previous school had a meeting with me.  While the meeting was actually about something else, she brought the subject round to my blog and mentioned the words "personal branding" which I'd never heard of before.  She seemed to find this distasteful, perhaps she thought that by blogging under my own domain name that it was in some way detracting from the my role at the school.  This couldn't have been further from the truth, however.  Thousands of educators were reading my blog and many of them liked what I was writing and assumed that the school where I was working was a good one that encouraged all the initiatives I was reflecting on.  Perhaps it was simply a case of the Tall Poppy Syndrome as one of the most frequently heard expressions at the school was "keep your head down".  Perhaps it was because personal branding (which I didn't even know that I was doing) was seen as bragging.

I was interested today, then, to read an article entitled Why You Should Brag (Just a Little More).  Even more interesting was this statement, which I posted on Twitter:

A 2011 Catalyst study found that the most powerful tactic for women in advancing their career was to make their achievements known. Calling attention to accomplishments led to more career satisfaction and was actually the only reliable factor associated with bigger raises. As much as we believe, or want to believe, that our achievements speak for themselves, that alone isn’t enough. We have to speak about them too.
— Janet Choi, CCO of iDoneThis

There was an immediate reaction from several educators around the world, one of which set me off thinking in a new direction because it brought up the idea that as women teachers we are role models for our girls - many of whom also don't want to seen as braggers.  In fact we need to encourage girls to speak up about their successes and achievements, and we can probably do this best by showing them that we can do it ourselves.

I never set out to either brag about what I was doing or to brand myself in any way - I simply wanted to share what I was doing - yet I'm interested that despite almost never tweeting about blog posts I have written, or posting links on other social networks such as Facebook or Google+ (still a hangover from the days at my old school where such things were frowned upon), my name and my blog are known simply by a sort of 'word of mouth' among educators and that when I go to conferences people come up and introduce themselves to me because they already "know" me from reading things I've written online.  I'm happy that ideas that I have written about have been discussed in staff rooms around the world - not because I want to brag or brand myself, but because when we share ideas we all benefit, and I hope that people can learn from my experiences (both good and bad).  And of course I am happy to brag about the great school I work at now, the wonderful educators I interact with daily, and the fabulous things that our students are doing.