An army of volunteers 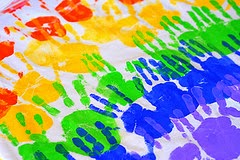 Reading through John P Kotter's Accelerate, I've come across the phrase "volunteer army" to describe how networks get populated.  Since we are reading this book as part of our R&D work, it has made me think about how all the various members of the R&D teams were "recruited".  When I arrived at ASB I remember getting an email, sent out to everyone, asking if I was interested in becoming part of R&D.  From memory there were just 2 questions to answer - what do you think you will get out of this, and what skills can you bring to the team?

Now I already knew that I wanted to be on this team - it was one of the attractions of coming to Mumbai.  I don't know of any other school that has an R&D department and I'd already heard about several initiatives that took place the year before I arrived, such as multi-age classrooms, BYOD, games based learning, project based learning, personalized learning and facilities design.  The thing that most attracted me to volunteering to be part of this team was that in the year that I started, several areas researched by the R&D teams the previous year were already being implemented.  I liked the way that I could be part of something that would be making a difference immediately.

Last year several of the teams from the 2011-12 school year continued with their work.  For example I was part of the BYOD task force which turned its focus to mobile devices.  Later in the year I was also part of a small team prototyping internships.  Other new initiatives which have now been incorporated into "the way we do things" are the alternative school year and intersessions.

The R&D core team brings together a large number of people from across the school.  It's completely different from a management driven hierarchy which relies on a small number of people taking on important roles.  In the R&D network all sorts of people are taking initiatives and not simply following orders.  In Chapter 5 of Accelerate, Kotter writes about a "get-to" and a "want-to" attitude, instead of a "have-to" one.  Our R&D meetings are dynamic and I come home with my head buzzing, and I'm sure everyone else does too.  It's such a contrast with the bi-weekly team leader meetings that I used to attend at a previous school where people were incredibly passive and where I seemed to spend a lot of time looking out of the window.  This was typical of a system where people were appointed to these positions, and then took on their posts of responsibility in addition to their regular work.  It was also a control mechanism - we were told that we had to support various initiatives that were brought to us from on high because of being in this" leadership" position.  There was no discussion about many of these issues and our views were not listened to.  It was not a team that people wanted to be on - in fact some colleagues refused to take on positions of responsibility for that very reason, instead saying they wanted to "focus on what they were doing in the classroom".

A network make up of volunteers works because you have energized people who know they can be instrumental in bringing about change and make a real difference to the organization - many people are prepared to put time and effort into that and so the mindset is completely different from one where you have "busy, harassed people who feel they have been stuck with one more set of tasks".  Kotter writes that both head and heart must pull people into the network, not just the former.  Volunteers have the right mindset:  they initiate action without waiting for higher-ups to give orders/permission.  In fact being in a network promotes the development of leadership behaviours (much more so than being in a hierarchy I've found).


In a network ... people will want to be change agents, will volunteer, and will do extra work without extrinsic carrots, if they feel the task is rational - but much more so because they feel some true passion for the work.

One thing that I've noticed is how the enthusiasm of the R&D team members is infectious.  A couple of years ago we prototyped BYOD with 2 classes, last year we prototyped BYOM with 3 classes, this year 37 colleagues stepped forward to prototype various mobile devices and to write a weekly journal about what they are doing and learning.  A couple of years ago another R&D task force investigated the idea of multi-age classrooms.  Over the past 2 years our Day 9s have been run in multi-age groupings and have now developed in both Elementary and Middle Schools.  More and more of our colleagues are being drawn into these experiences.

Some of the work we do on our task forces is, indeed, brand new.  Other work is about redefining existing ideas to take account of the challenges of tomorrow.  For example multi-age classrooms were around hundreds of years ago, apprenticeships and internships were also fairly common at one time too, but what we are doing is breaking down the barriers that have been erected by "formal" education over the past decades, and turning these ideas into a new reality.

Photo Credit: John-Morgan via Compfight cc
Posted by Maggie Hos-McGrane at 10:12 AM

Email ThisBlogThis!Share to TwitterShare to FacebookShare to Pinterest
Labels: Accelerate, Research and Development