Flipped Learning: is it revolutionary or transformational? 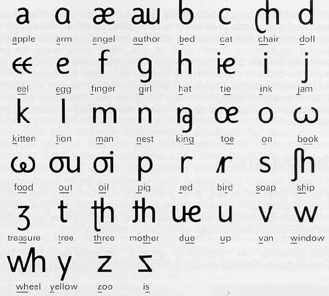 When my younger brother was in school in England in the 1960s he was taught to read using the ITA alphabet (see image).  This alphabet was devised by Sir James Pitman, the grandson of Sir Isaac Pitman who invented Pitman's shorthand, as a way of teaching children to read more easily using phonics.  After children had learned to read using the ITA (initial teaching alphabet), they would then move on to learn standard English spelling.

After the 1960s, the pendulum of educational learning theory swung away from teaching phonics, and ITA fell into decline. Another factor that caused this was that it was noticed that many children were not able to easily transfer their early ITA reading skills to standard English, and that they were confused at having to learn two alphabets.  The ITA, for me, is a good example of an educational movement that was revolutionary, yet made no lasting transformation on learning.

Another example I can think of is middle schools.  When I attended school in the UK in the 1960s and 1970s there was basically a two-tier education system:  primary up to the age of 11, followed by secondary - the secondary school you went to was determined by your score on an exam that all children in the UK sat called the 11+.  In the late 1960s views about this two-tier system changed, following the Plowden Report of 1967 which advocated a three-tier system of primary, middle and high schools.  In the 1970s local educational authorities, in line with the new thinking, set about establishing middle schools.  Interestingly there was no common agreement between local authorities about which age of children should be in a middle school - from one part of the country to another it varied so that some middle schools were for children aged 8 - 12, some were for children aged 9 - 13 and some for children aged 10 - 13.  By 1980 thousands of middle schools existed across the UK. When I left school in the late 1970s I'd never even heard of middle schools, but by the time I became a teacher in the early 1980s middle schools were everywhere.  As a secondary teacher we had our children for just 3 - 4 years until they left school at 16.  By the late 1980s, however, when I left the UK to teach overseas, the pendulum was swinging again.  A national curriculum was due to be brought in, and the number of middle schools declined.  In the UK today there are less than 200 middle schools, and the ones that remain are designated as primary or secondary.  Another huge revolution that failed to produce any lasting transformation.

So how about flipped learning?  I was interested to see that Jonathan Bergmann and Aaron Sams tackle this question in their new Flipped Learning book.  They write that the difference between revolutions and transformations are that revolutions happen from the outside in and from the top down - which certainly seems true when I consider the failure of ITA and middle schools in the UK. Transformational change, they write, is different in that it happens from the inside, and that it happens virally as ideas spread from one person to another, who share their learning and become change agents.  In transformational change, change happens from the bottom up.

Examples such as ITA and middle schools were definitely top-down revolutions and seem to have had very little input from teachers.  Teachers often see these changes in the form of bandwagons that they are forced to jump onto for a short time and then find they have to jump off again.  Is flipped learning different?  It does seem that it has started with teachers and it has spread around the world as many different teachers adopt this model in order to "reclaim" the face to face time with their students in class, to focus on supporting students to learn, instead of simply using this time to teach.  I suppose only time will tell, but for me it does seem that the classes where flipped learning is going on are certainly the ones that are making transformational change.
Posted by Maggie Hos-McGrane at 1:11 PM