The Horizon - getting closer or further away? 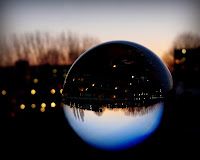 I've been looking forward to getting the K-12 Horizon Report every year since 2010, but this year was a bit different.  I've had the preview lying on my desk for a while and haven't yet been tempted to read it.  I've become disillusioned with the timeframe.  Let's give an example.  In 2011 predictions for K-12 education were as follows:  cloud computing, mobiles, games based learning and open content. Since this report is now 4 years old, you would have imagined that anything that was on the near horizon back then (1-2 years away from implementation) would already be mainstream by now.  Yet last year cloud computing was still on the "near horizon" while games and gamification were seen as being 2-3 years away.  So I'm interested in a way to read this report to see how quickly we have moved this year - and which predictions that were made in the past are actually moving further and further away.

In the 2015 Horizon Report Preview for K-12 the near horizon includes BYOD and Makerspaces.  In fact BYOD was already on the near horizon in 2012 and again in 2013!  The report notes that BYOD adoption has less to do with a move to reduce technology spending and more to do with the fact that this reflects contemporary lifestyle and ways of working and learning.  Makerspaces are seen as important because of the shift in skill sets needed in our world, making creativity, design and engineering more important for education.

On the medium horizon this year are 3D printers and rapid prototyping, and adaptive learning technologies.  The 2013 Horizon Report mentioned that 3D Printers were about 4-5 years from becoming mainstream, so the timeline for these now being on the medium horizon of 2-3 years is certainly in line with that.  In last year's report adaptive learning was mentioned as a challenge so it's good to see there have been developments in data-driven software and online platforms that adjust to students' needs as they learn, anticipating the type of content and resources that individual learners need at specific points in time to make progress.

This year on the far horizon of 4-5 years away are badges and micro-credits, and wearable technology.  I believe that badges were first mentioned in the Horizon Report in 2013 as a way of giving credentials for online learning, which at that point was seen as being on the near horizon.   In 2013 and 2014 wearable technology was also seen as being on the far horizon.  In fact as far ago as 2012 Google Glass was launched, and it hasn't come a long way since then.  I'm more excited about some of the new wearable technology such as the smart watch and Fitbit, though I think there is still some way to go before these devices will be mainstream in schools.

So while I am still interested to read about what's coming up on the horizon, I'm now starting to take some of the time frames mentioned with a pinch of salt.  Predicting the future is always difficult, but I'm going to read this report with more scepticism than the previous ones.