We do not learn from experience 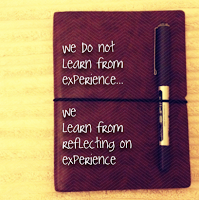 Over the past year I have engaged in 8 days of foundation training in Cognitive Coaching (in June, November and March) and so this summer it was time to start on the advanced course with the aim of refining and extending my coaching capabilities.  For me coaching is definitely a journey - one that people can be on for decades as they hone their skills and evolve in their identities and mediators of thinking. I feel like I have come a long way this year.

And so, as John Dewey said, it's now time to reflect on my experience and to learn from it. It occurs to me that I have now been in India longer than I was in Switzerland. This seems strange to me because my years in India have flown past, whereas my time in Switzerland seemed to move forward in slow motion.

One of the participants on my course was talking about how she wants to be a supportive leader to help new staff to integrate better at her school. She talked about how her own transition to her school had been easy - and how the school she works in is such a great school - and how difficult she finds it when new people who come to her school have a hard time, because her school does so much to support new people. When I reflected on my own experience of transitions it occurred to me that it's not a simple case of A+B=C. I have been tremendously sad to leave one excellent school, and yet still made an easy transition to the next one. Then later, I made what I thought was going to be an easy transition back to Europe again, only to find that despite living in the most beautiful country in the world with an incredibly high standard and quality of living, I was completely thrown by how hard it was to adjust to my new school. Only now, three years later, am I really able to try to reflect on this experience and learn from it and ask the questions about why I found it so hard.

What I have come to see during our week of advanced Cognitive Coaching is that I was looking at the top of the iceberg and seeing that everything on the surface looked fine. On the face of it, living and working in Switzerland should certainly have been an easier experience than living and working in a challenging country like India. Yet that hasn't been the case. I've come to realise that it's what is below the surface that is so vitally important. It's the shared beliefs and values - the match between mine and the school's - that lead to successful transitions. And what I faced - the thing that up to now I couldn't even identify let alone name - was a mismatch between these beliefs and values and my identity. We also talked about mental models - the assumptions that we carry in our minds about ourselves, other people and institutions. This has been described by Peter Senge as "a pane of glass framing and subtly distorting our vision" and that "differences between these explain why people can observe the same event and describe it differently: they are paying attention to different details." And I guess that was true for me.

When I think about the 5 states of mind, I was certainly low in consciousness. I had no idea that my frustration came from these different beliefs and values that were perceived as a threat to my identity. I was also low in efficacy, feeling trapped in a bad situation for 3 years until my daughter could graduate. I think I was low in craftsmanship and flexibility too - never having been in a similar situation before, I had no survival skills to draw on to help me navigate the difficult waters. The surface of the iceberg looked beautiful, but deep under the water it was treacherous and deadly. Actually I am not alone: for many people their beliefs, values, identity and assumptions are not well explored by them or understood. It has taken me six years to finally come face to face with mine.

We talked about the fact that there is something even deeper in us than our deep structures and these are called our reference structure. These are built up from life experiences and the important events and people who have shaped them. These are definitely not the domain of cognitive coaching - you mostly need the help of a therapist to get to these and you need to go back into your past to come to resolution and to build new structures. Cognitive coaching, on the other hand, starts with the present, acknowledges the emotion, but doesn't dwell on it, and immediately looks towards the desired state, the goal, and the way to make that happen.

I have two more weeks of vacation before flying back to India for Year 4 at ASB. While I may not have internet for much of this time at my mother's I've decided that I will journal every day instead and reflect on my learning in this advanced course. I will probably collect all these posts and then publish them when I'm back online again. I'll be thinking about the 6 domains of inquiry, the social needs of the brain, the calibrating conversation, and what neuroscience can teach us about coaching. I'm hoping that these posts may well be useful to other teachers who are exploring coaching as a powerful learning tool.
Posted by Maggie Hos-McGrane at 1:38 AM