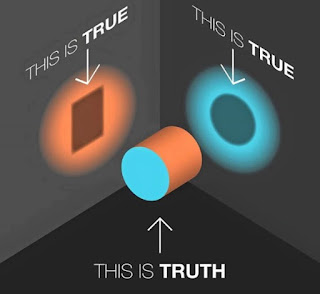 Perspective is one of the PYP concepts.  Our knowledge is moderated by our perspectives, and different perspectives lead to different understandings, interpretations and findings.  I thought the graphic on the left, which I originally saw on Facebook, summed it up rather well.

One of our holiday reading books was To Sell Is Human by Daniel Pink.  The part I've read so far contains a section on perspective, which is entitled Use your head as much as your heart. This section struck a chord with me as it tied in with my recent thinking about cognitive coaching.  This is what Dan Pink writes:

A large part of Pink's book is about what he refers to as "non-sales selling" (persuading, influencing and convincing others).  This is how it is relevant to education, for example he says that teachers sell students on the value of paying attention in class, and that instead of being traditional sales people trying to persuade people to part with cash, we are instead moving people to part with intangible resources such as attention.  In fact there is a whole section in the book devoted to "Ed-Med" professionals who range from community college instructors to nurses and genetic counsellors - who all want to move/persuade/help people to put time, effort and attention into something that will make that person better in some way (in terms of education or health).  So which is most effective, perspective or empathy, thinking or feeling when it comes to moving people?  According to Pink it's perspective/thinking.  He writes, "when it comes to moving others, perspective-taking is the more effective of these fraternal twins."  I'm thinking about this and will write more about how I think this relates to coaching in an upcoming post.
Posted by Maggie Hos-McGrane at 9:40 PM