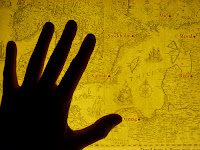 It's that time of year again - many international schools have already asked teachers about their intent to stay or go next school year.  This year I've been more involved in the Global Recruitment Collaborative that ASB prototyped last year - we have had a lot of interest in this, and in the past few days while I've been at the Learning2 conference in Johannesburg, a number of people have approached me directly about recruitment.

Many international teachers talk about it being "their time" to leave. They are happy to spend between 3-5 years at a school and then throw their hat into the ring again.  When I ask these people where they want to go, many of them are very open - anywhere new would be considered.

There are some people who seem to have wanderlust (possibly I've become one of them - I'm now living in my 7th country).  Recently following a link in Facebook I found there is actually a genetic link to wanderlust.  People with the bug to travel don't think of one place as home (home is wherever they happen to be), and so they enjoy exploring as much of the world as possible.  This genetic link came out of studies into ADD, which linked it to the dopamine receptor D4.  Around 15 years ago a study from the UC Irvine found that people with this gene were the ones who had a history of travel, as well as risk-taking and hyperactivity.

Apparently children who have this gene are the ones who are most likely to form hypotheses in their minds, and then experiment to test these hypotheses.  If they continue like this into adulthood, they are also more likely to want to move and live in new places.  I'm wondering if we did a study of international teachers, especially those who move from school to school frequently, getting itchy feet every 3-5 years, whether they too would be carriers of the DRD4 gene.  And as a mother of children that have been brought up in several countries, I'm wondering if this gene is hereditary.

Posted by Maggie Hos-McGrane at 8:13 PM