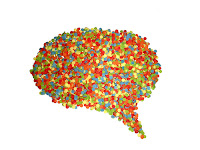 It's election day today in the US, and although I work in an American school, I've tried my hardest to distance myself from the emotions that surround this election and the political leanings of both colleagues and students.  However it has been interesting to look at the techniques that have been employed by the candidates to try to influence the electorate and persuade people to vote for them.

I've written before about the power of pausing.  I read a bit more about this recently, also tied to politicians.  In Bob Garmston's book The Presenter's Fieldbook, he advises us to "employ an extended period of silence before making a point ... speakers who do not pause for long enough may sound subordinate."  Garmston cirtes the research done by Iain Ewing who analyzed the speak patterns of French politicians and he discovered that the more important the speaker, the more slowly he or she speaks and with more and longer pauses.  For example he analyzed the speeches of Mitterand in 1974 when he was in opposition and running for president and found that around 30% of his speeches were pauses, with an average length of 0.8 seconds.  However when he analyzed the speeches of Mitterand in 1984 when he was president of France he found that 45% of the time in speeches was pauses, and that the average length of these pauses was 2.1 seconds.  Garmston mentions other notable speakers who also spoke slowly and with lots of pauses:  Winston Churchill, Ronald Reagan, Martin Luther King Jr. and John F. Kennedy.

Now along with this he noticed that the most important points of these speeches were delivered as "soundbytes".  This style of speaking became popular as an effective communication strategy during the 1988 US presidential elections.  Analyzing speeches before this time, for example during the 1970 election, the average soundbyte for candidates on the network evening news was 42.8 seconds.  However by 1988 it had fallen in 9.8 seconds, and by 1999 it was 7.3 seconds (about 20 - 25 words).  I'd be interested to know what it was for the current elections!

Pausing, and thinking about how to get the most important point across as a soundbyte are certainly things I can work on to improve the effectiveness of my presentation skills.  Before I use this with adults, however, I'm going to try it out with a couple of classes to see what the impact is on student learning.