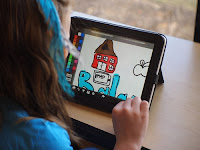 I’m really enjoying the online PYP course I’m doing this summer about the role of technology, mostly because I’m finding lots of new resources that I wasn’t aware of before. Today I read one participant’s post about the Digital Play Framework for the Early Years. Now this is an area that I know very little about. I’ve known some Early Years educators who have been very active in using technology with young learners, and some who have been totally opposed to it. I was hoping that by exploring the DPF that I would come to better understand the different viewpoints.
There have been various studies about digital play in recent years in children aged 0-6 in both the UK and the USA. Generally these show children engaged in a range of technologies including TV, computers and mobile devices. For this age group the average screen use time was less than 2 hours a day. I was interested to see that both YouTube and social media has become popular with children under the age of 8, which I must admit seems awfully young to me! The biggest factor in this appears to be the use of touch screen technology, allowing young children to use technology easily. Although some people are concerned that technology use leads to diminished play, studies seem to point to the opposite: digital technology provide rich opportunities for the promotion of play - opportunities that sit alongside more traditional play activities.

In the UK there have also been projects at the Universities of Sheffield and Edinburgh looking at the use of apps and how they promote play and creativity - for example producing new and original content such as drawings. These studies drew on play classifications developed by Hutt:
In addition the studies considered Bird and Edward’s Digital Play Framework in which sets of behaviours relate to the 3 types of play identified above.
In studying play, it was observed that there were many examples evidence of children trying to get control of both the physical environment (for example building dens) as well as the virtual one (for example in Minecraft). Imaginative play was evident in augmented reality apps, for example when children treat digital pets as real animals and take care of them.

In conclusion it seems that contemporary play draws on both digital and non-digital forms and often moves across both. The studies certainly debunk the idea that digital play is not “real” play.
Jo Bird, researcher in early childhood technology and creator of the DPF, has shared observation tools for tracking children’s behaviors when using a variety of technology tools. Below are links to Bird’s DPF Handouts: