The Candles of the People 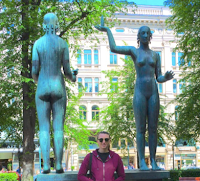 This summer I spent a couple of days in the Finnish capital of Helsinki with my daughter.  Having already visited or lived in the other Scandinavian countries, I was curious to see how Finland compared, and even more interested because as an educator I'm reading regular reports of Finnish success in schools.   Since the year 2000, when the OECD first started publishing a ranking of international educational systems, Finland has been at or close to the top of the list of 70 countries in maths, reading and science.

The reasons for this success are not immediately obvious.  There is no more spent on education per student than other OECD countries, and Finnish teachers are paid roughly in line with other Western European teachers.  Class sizes are also roughly the same - around 20 - 23 children per class.  School days are short (around 4 hours), holidays are long (10 weeks in the summer), students don't start formal schooling until the age of 7, there is little or no testing below the age of 16, and almost no homework - and yet over 95% of Finnish children go on to some kind of further education.

Another striking feature of Finland's performance is that the success is spread evenly among all its schools - there is just a 4% difference between the performance of the best and worst school. This compares with other countries such as Singapore, Hong Kong and Taiwan which also perform well but where there are huge differences between schools as students are often admitted on based on entrance tests that measure ability.  I was interested to read that enormous resources are channeled into supporting students who fall behind in Finland - around a third of Finnish students get one-on-one tutoring each year.

The reason most frequently cited for the success of Finland's education system is teacher training. Some of this is historic, as following independence from Russia 100 years ago teachers were seen as playing a key role in the newly independent nation.  This early education was mostly survival skills such as woodwork and sewing, and teachers became known as the "candles of the people", lighting the path to Finnish self reliance.  Today teaching is an attractive career in Finland.  This compares very favourable with the UK, where as I mentioned in a previous post, every teacher friend I have who started with me back in the 1980s has now left the profession.  Today I was reading a BBC article that stated that there is such a shortage of trained teachers in the UK that schools have been allowed to employ unqualified people - there are 24,000 teachers without formal teaching qualifications in state schools in England - an increase of more than 60% over the past 4 years. Looking closer at these figures, it seems that a large number of unqualified staff are in academies and free schools.  In local authority secondary schools around 5% of teachers are unqualified, but in academies and free schools it's more like 10 - 12%.

In Finland, however, teaching attracts the brightest students, with over a quarter of university graduates stating that this is their top option.  In fact teacher training courses can be more difficult to get into than law or medicine, and since 1970 all Finnish teachers are required to have a master's degree, which is seen as a crucial element in their success.  In addition there is not the two-tier public/private system of education that exists in the UK as almost all schooling is state-funded.

There are some changes underway in Finnish education:  one year ago it became compulsory for every Finnish school to teach in a more collaborative way, to allow students to choose a topic relevant to them and to base subjects around it.  Basically there is more of a PBL approach with the aim of equipping students with the skills they will need - no longer woodworking and sewing, but instead critical thinking and technology.  And just as 100 years ago teachers were called "the candles of the people" today they are still carrying on that role, leading the next generation of Finland's people into the future.
Posted by Maggie Hos-McGrane at 3:25 PM