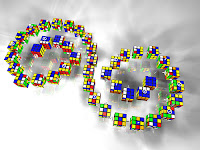 I've been doing some research about teaching mathematics, and decided to start by reading and listening to the thoughts of the British technologist Conrad Wolfram, who for a number of years has been arguing that we need to rebuild a maths curriculum for the computer age and that students should be calculating "just like everyone does in the real world".  His argument is that school maths is very disconnected from the maths used to solve problems in the real world, and that it needs to be more practical, more conceptual and less mechanical.

I watched his TEDtalk where he states that maths is more important to the world than at any point in human history, yet at the same time there is falling interest in mathematics education, and a lot of this is because we are not teaching "real" maths in schools.  He argues that maths isn't something that is just done by mathematicians, it's done by geologists, engineers, biologists and so on, often using modelling and simulation, yet in education it is mostly being taught using "dumbed-down problems that involve lots of calculating, mostly by hand".

Conrad Wolfram talks about how mathematicss education should basically be done in 4 steps.

Math has been liberated from calculating. But that math liberation didn't get into education yet.

As Wolfram sees it, the problem is not that computers dumb down maths education, but that without them we can only pose dumbed-down problems to students right now.  We don't need to have students work through lots of examples in order to come to an understanding of mathematical concepts, what we really need to do is to teach students to understand how maths works, and the best way to do that is to teach programming, which makes maths both more conceptual and more practical.

Wolfram also argues that using computers in maths allows us to reorder the curriculum.  We currently teach according to how difficult something is to calculate - but he says we need to change this so that we reorder according to how difficult it is to understand the concepts - the calculating can be done by computer.  He talks about moving from the knowledge economy to the "computational knowledge economy" and this can only be done by a "completely renewed, changed maths curriculum built from the ground up" and based on using computers to perform the calculations.  Hearing this, as someone who really believes that technology can transform learning, I became very excited indeed!

Email ThisBlogThis!Share to TwitterShare to FacebookShare to Pinterest
Labels: PYP, Teaching and Learning