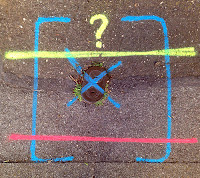 Over the years I've read a lot about grades, including various books and articles by Alfie Kohn who sees all grades (even the high ones) as being ultimately demotivating for students.  I have lots of ideas about grading myself, so I was curious to read the chapter Assessment for a Growth Mindset, in Jo Boaler's book Mathematical Mindsets.  Obviously Jo is focused on testing and grading in maths, but what she writes can be applied across all subjects:  grading leads students to identify and define themselves in terms to letters and numbers.  She writes,


In the United States, students are over-tested to a degree that is nothing short of remarkable particularly in mathematics.  For many years students have been judged by narrow, procedural mathematics questions presented with multiple-choice answers.  The knowledge needed for success on such tests is so far from the adaptable, critical, and analytical thinking needed by students in the modern world that leading employers such as Google have declared they are no longer interested in students' test performance, as it in no way predicts success in the workplace.

She argues that maths is over-tested because it's so easy to test - and because of this teachers are also limited to teaching narrow procedural mathematics and to giving lots of practice tests in class in order to prepare students for later success - and this generally starts with a beginning of year test.  What sort of message is this sending to our students?  And what sort of feedback to do they get?  Mostly they will get a percentage or a grade, which Jo argues is damaging to learning (because half of the students find out that they are not as good as the others).  She writes, "study after study shows that grading reduces the achievement of students".

The result of all this - that students who are graded become less motivated - can be reversed when students are given diagnostic comments instead of grades.  Jo advocates less assessments, but that the occasional assessments that are given should be accompanied with growth comments, because what we want is for students to be excited and interested about learning and when this happens they will be motivated and their achievements will increase.  She writes,

So how can we assess students that encourages a growth mindset and shows them a positive pathway towards success?  I'll be blogging about this tomorrow.

Photo Credit: edokhan Flickr via Compfight cc
Posted by Maggie Hos-McGrane at 1:58 AM

Email ThisBlogThis!Share to TwitterShare to FacebookShare to Pinterest
Labels: Assessment