Building virtual bridges and windows to the world 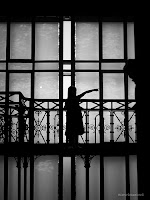 “When I die, you need to pick up my gun and keep fighting." These were the last words spoken by Christoper Stevens, the American Ambassador to Libya who was murdered on September 11th, 2012 during a 13-hour terror attack on the US Consulate in Benghazi Libya.   Christopher Stevens was known for his fascination of other cultures and his goodwill towards others.  As a student he studied abroad in Spain and Italy and later joined the Peace Corps and worked in Morocco.  As a diplomat he spent the majority of his career in North Africa and the Middle East dedicating himself to building understanding between people from different countries.  Following his death, the Steven's Institute was set up in partnership with his family.  The aim of this organisation is to give young people the international exchange experiences that Stevens had, which helped shape him into the person he became, and this is done through virtual exchanges to build global competences and mutual understandings between young people in the Middle East and North Africa and others of a similar age in the USA.

Person-to-person exchanges change lives, create opportunities and build lifelong mutual understanding and respect. But such programs, as vital and transformative as they are, reach only thousands. Less than 1% of young people ever get the opportunity to study abroad - so virtual exchanges are one way of expanding that number.  Virtual exchanges can reach millions and create windows to the world for every student. Today, technology has a huge role to play in enabling virtual exchanges to take place, so that life-changing, cross-cultural experiences can be made available to a large number of young people.  The Initiative has partnered with Twitter and Vidyo to facilitate these exchanges.  Over the past two years, awards have been made to 22 organisations that have reached over 28,000 young people in the USA and in 16 countries in the Middle East and North Africa.

A couple of weeks ago I was contacted by Henry Shepherd, the Assistant Director, to ask if I was interested in getting involved in reading and assessing application proposals for this year's round of grants.  Henry told me he'd found me on Twitter and had reached out because of my participation in online discussions about international education.  After a Skype chat, and then a webinar about how to actually rank the applications, I was all set.  I've been given 13 proposals to read, and to be honest it has been both a humbling and uplifting experience.   The priority topics are technology and computing, world affairs and global studies, business and entrepreneurship and language learning and practice.  The Stevens Initiative puts emphasis on reaching young people whose access to exchange programmes has been limited. Virtual exchanges can give young people new opportunities to gain critical skills and see the world from new perspectives even if they are not able to participate in an in-person exchange.  The aim is to address the needs of women and girls, underserved youth, refugees, people with disabilities and minority groups.

Since being sent the applications last week I've managed to read through a couple each day. I've been impressed by how many of these proposals aim to give young people a better understanding of global issues and how the issues in their own communities are part of a global context, while at the same time building practical skills of the participants.

Ambassador Stevens might not have meant this when he urged those in the consulate to keep fighting. However I think he would have been proud of what has happened since his death, and how the Stevens Initiative has been established to work towards a better and more peaceful world through empowering young people to participate in activities and experiences that will give them long-lasting skills and knowledge to help them understand global issues through the eyes of the participants in the other countries.

One of my biggest fears on my return to the UK this summer was that I would not "fit in". I'd become worried by conversations I'd overheard on buses, in pubs and at bus stops about immigrants in the UK. I wondered where these intolerant attitudes had come from . Therefore, in my own small way, I'm delighted to be part of the fight against bigotry, xenophobia and closed-mindedness. It has been a joy to be part of an initiative that aims to give young people the knowledge, skills and experiences they need to prosper in an interconnected world.
Photo Credit: Wiertz Sébastien Flickr via Compfight cc
Posted by Maggie Hos-McGrane at 9:39 PM