Taking Action in the Early Years

I'm continuing with a series of posts about the Early Years in the PYP, based on a new publication from the IBO in October.  For this post I want to focus on how young students can take action.  A couple of posts ago I wrote about learner agency in the Early Years, which is an important first step in encouraging action.  By valuing agency, students will feel empowered to take action as a result of their learning.

Students will take action when they develop an understand of themselves and others, in particular a sense of responsibility towards their families, friends and classmates which are fostered through developing relationships.  Action also emerges as they respond to real-life experiences that have meaning for them.  A couple of months ago I was in an Early Years classroom in the UK, and I noticed the children were naturally sorting their trash - some items were being put into the "recycling box" and others were thrown into the bin.  I overheard a girl asking about this - she had noticed that some mornings when she came in the recycling box was empty and she wondered where all the items had gone.  The daily actions that the students made when deciding where to put rubbish clearly promoted some deep thinking and inquiry, and led to more conversation about the rubbish at home as well.

For young children action can be linked to the learner profile.  Students demonstrate that they are caring when they help others, for example by sharing their supplies in class, watering the class plants and so on.  Action can also involve a change of behaviour such as tidying up after themselves and showing respect for the learning spaces.  Students can also demonstrate being risk-takers as they learn new skills.  Action can be as subtle as changing their minds about something, showing that they are developing their thinking skills, and of course communication and social skills will also be developing as students ask questions, learn to take turns and to recognise the emotions of themselves and others.

As teachers we play an important role in fostering the agency and skills that enable students to take action that is meaningful to them.  We create a range of indoor and outdoor environments that encourage and support students' interests and emerging identities.  We show them that we value them and see them as competent, and so students feel confident to take action.

The publication The Early Years in the PYP contains the following table which I think is a great reminder of what educators can do to encourage and support student action in the Early Years. 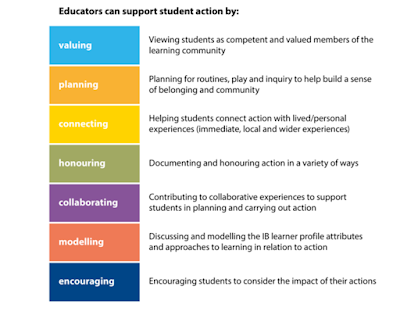 Posted by Maggie Hos-McGrane at 3:49 PM