The three phases of documenting learning

I'm now up to Chapter 6 of the book A Guide to Documenting Learning written by Silvia Rosenthal Tolisano and Janet Hale.  As I started reading this chapter I immediately went to my phone to look at the way I document my life (photos) and realised I still had a few from 2011!  There is no cost involved in taking photos or storing them on my phone, so I tend to photograph things I want to remember short term (such as an advert for an upcoming film) - but then forget to delete them after I've seen the film.  Of course I also capture things I do - and then post them on Facebook to share with friends for example, but again, long afterwards the photos are still there on my phone. So many of us are used to documenting our lives in the moment without much thought that it's not surprising that we have to teach our students that not everything they capture is worth documenting and sharing.

At my last school we did a prototype with Seesaw.  Kindergarten teachers taught their children to use the iPad app and they did this very confidently whenever they wanted to document/share something.  Grade 1 were a bit more intentional and had students document perhaps once a week.  Looking at the back end of the app, I could see an initial spike in Kindergarten parents engaging with their children's artefacts, but when they got 90+ messages a week it was clear they stopped engaging as it was just overwhelming.  This wasn't documenting the LEARNING, it was just documenting every single thing the students did during their day.  In contrast the Grade 1 parents interacted with the artefacts shared and this remained constant during the prototype.

It's important therefore to be clear about the purpose as well as the process of documenting learning.  Silvia describes this as establishing purpose, capturing information, transforming information in meaningful ways for an intended audience, and sharing the message.  She notes that it is important that the documenting learning process is viewed as a natural part of the learning experience, not an add on, and that while at first it might be time-consuming, it eventually becomes part of routine practice.

There are 3 phases to documenting learning: 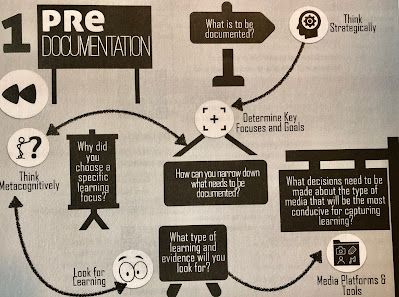 Thoughtful determination should happen prior to the documentation process to avoid students having too many photos or videos to deal with.  Reflecting on the needs and determining what learning is going to be documented is an important step as it helps students to think about their choices and reasons.  They also need to think about the type of learning they will use to show evidence of their learning - possibly connected to the curriculum, learning objectives or skills.  They may also decide it's important to show this learning over time.
Other decisions that need to be made prior to the documentation are about how the learning will be captured, the platform used to show/display the work and the tools that will be needed.
During-documentation 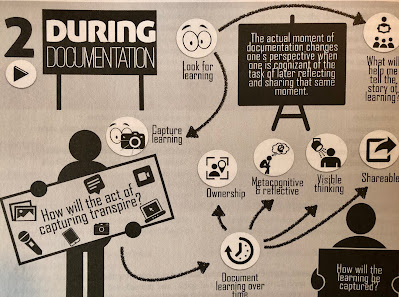 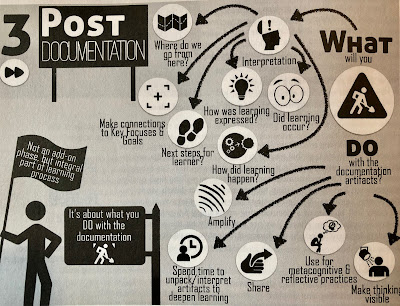 This is the phase where the interpretation of the learning takes place.  As learning is always ongoing, this helps the students to be more self-directed in determining their own next steps.  This interpretation phase is essential and involves metacognition as students reflect and wonder about their own learning experiences, capabilities and performances.  During this phase, the students also have to articulate the evidence of their learning to others, again giving them ownership of the learning goals.  They should notice patterns and trends in their learning, deepen their understanding of how they learn, and build a growth mindset as they come to realise that failure is a part of the learning process rather than a result of not knowing.
Photo Credit:  Mohamed Hassan on Pixabay
Posted by Maggie Hos-McGrane at 4:28 PM