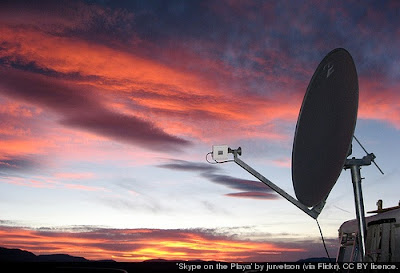 This is the time of year when teachers in international schools have to decide whether to stay one more year/one more contract or say "I've had enough" and try to find another position in another school in another country. Today I have been reading a short blog post and reflecting on the different between hiring and recruiting. Seth Godin claims:

Hiring is what you do when you let the world know that you're accepting applications from people looking for a job.

Recruiting is the act of finding the very best person for a job and persuading them to stop doing what they're doing and come join you.

Recruiting raises the bar because it demands you have a job worth quitting for. The recruiter doesn't solve an urgent problem for the person being recruited, in fact, they create one. That person already has a job (hence no problem). The problem being created is that until they change over to your job, they'll be unhappy. That's a huge hurdle for a job to overcome.

Last week I was also listening to the Shifting Our Schools podcast (Episode 30) where Jeff Utecht and David Carpenter were discussing how to recruit to be an international educator. More and more teachers these days are choosing not to go to recruitment fairs and are approaching schools directly. These teachers have done their homework, know the type of school they want to work in and where in the world they want to relocate.
In my 22 years as an international educator I have only been to one recruitment fair and to be honest it was not a pleasant experience. As David and Jeff discussed, I was a teacher with 2 dependent children and a dependent spouse and was sure to be the last one in line for any job. As it happened I did secure a good job at that recruitment fair, but that was probably because in addition to attending the job fair, I also made a DVD showing work I had done with my students, links to projects that the students had published and so on. There was not actually a job for me at the recruitment fair, but the school I ended up in was impressed by what I had done and decided to create a job for me.
When I decided to move back to Europe again I was determined not to go the job fair route again. This time I targetted only 7 schools that I was interested in and wrote directly to them giving the director a link to my website. When I received a response (which I did from all of them), I then sent a DVD with more information, including testimonials and videos. This approach was more successful than going to a job fair as I ended up with Skype interviews in November, well before any recruitment fairs took place. As I was the person in the driving seat I felt able to ask questions that perhaps put school administrators on the spot such as "Is it a problem to you that I have dependents?" This time I felt I was in control and I was discussing my achievements and my approach to teaching, rather than being at a recruitment fair where school leaders were already familiar with the fact that I had dependents and had already lined up teaching couples without children or singles who were also interested in the positions that were available at their schools. This time, too, I ended up in a position that was newly created for me, though I did have to work hard to persuade the Director that it was OK to hire someone that he had never met! Well, of course, I am an IT teacher so perhaps part of my role is to suggest how technology can make life easier and reduce costs.
Posted by Maggie Hos-McGrane at 12:35 AM