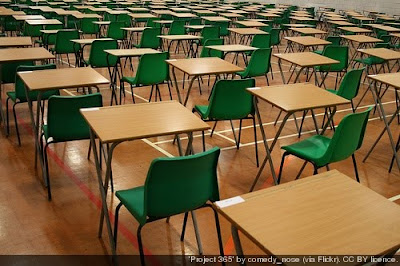 Our 10th Grade daughter is at the point where she needs to decide what she is going to be studying next year. We're at an international school which offers both AP (Advanced Placement) and IB (International Baccalaureate). For me, this is the first time in my 22 years of international education that I have been at a school that offers AP, as one of the criteria I've used in trying to decide which school to work in has been that the school is an IB World School, offering all 3 IB programmes (PYP, MYP and IB). In part this is because I have taught all 3 programmes therefore I am more employable if I target IB schools, in part this is because I have always believed the IB is the best qualification in the world for 18 year olds and the best preparation for university as well as for life. I love the philosophy of the IB, which aims to create a better world. The IB mission statement is as follows:

The International Baccalaureate aims to develop inquiring, knowledgeable and caring young people who help to create a better and more peaceful world through intercultural understanding and respect.

These programmes encourage students across the world to become active, compassionate and lifelong learners who understand that other people, with their differences, can also be right.

Some weeks ago, I was discussing this with someone whose children had already made this choice. He was telling me that it's easier to get into top British universities with APs than the IB. He said that if his sons had done the IB, they would probably have got into those universities that used to call themselves polytechnics before the government decided to reclassify them in an attempt to meet the target of 50% of 18 year olds in university education, but would probably not have been successful in getting into the older, established "real" universities. My own experience as a mother of an 18 year old who has just gone to Exeter University this year, is that UK universities don't really understand the rigor of the IB, despite the ranking system given to the IB by UCAS, the university application service for all British higher education courses. UCAS on its tariff website shows that 3 As at A'level plus an AS level is worth 420 points - this is the current maximum that any UK student could get. The IB equivalent of 420 points is a score of between 31 and 32 points. Last year, when our son applied to UK universities, his offers ranged from 32 to 36 points - well above what any British student could ever achieve. When we visited these universities the summer before he actually made his application and questioned them about why the offers were so high, it was clear that we actually knew much more about the value and rigor of the IB than these university admissions tutors did! Clearly they know even less about the AP system because they are giving offers of university places for just 3 APs - which are worth just 360 points if a student gains all 5s, the highest possible score in each subject. Clearly, therefore, APs do seem to offer a easier "back door" into UK universities. In addition, at my school it is possible for students to "collect" APs (which are just one year courses) by doing 2 in Grade 10, 3 in Grade 11 and 3 in Grade 12 - 8 APs makes them sound like geniuses. However, my gut feeling is that the IB diploma is still a better preparation than a whole smattering of APs.
The AP has been around since the 1950s, providing college level courses to US high school students. The IB is newer - it was established in 1968 and was established to offer breadth and depth as well as an international perspective. The IB Diploma is a 2 year course and students have to study 6 subjects from across the full curriculum (2 languages, experimental science, maths, social science - called Individuals and Societies by the IB - and arts), as well as engaging in 150 hours of community service (CAS - creativity, action and service), an extended essay of 4,000 words which requires in-depth individual research and a study of the theory of knowledge. The IB is accepted for university admission in over 100 countries, the AP is recognised in less than 30. For many international students, therefore it would seem that the IB is a better choice if they want to be flexible in where they study in the future. However if a particular student had a weakness in one area, for example languages, maths or science, the IB Diploma could be particularly challenging as it does involve passing all 6 subject groups.
Another difference between the IB and the AP is that the AP score is entirely based on examination results - some of which are multiple choice and marked by computer, whereas the IB has a large percent of the grade based on internal assessment, fieldwork, class work and so on. In many subjects this is between 20 - 50% of the final grade. The remainder of the grade is made up of external assessments/exams. In some subjects, such as Performing Arts, there is no final exam. It seems therefore that one crucial factor in trying to decide whether the AP or IB is best could be whether or not an individual student performs well on exams, or whether they best show their knowledge through continual assessment over a 2 year period. My personal opinion is that often examinations test the lower order skills of Bloom's Digital Taxonomy - the remembering and understanding, whereas the internal assessments, extended essay and theory of knowledge of the IB deal more with the higher order thinking skills such as applying, analysing, evaluating and creating.
One final difference is that the AP is graded on a bell curve - each year a certain percentage of students get 5s, another percentage get 4s and so on. The IB is more individual - meaning that if there were 10 Einsteins in a class, for example, they would all get 7s in the IB. I feel more comfortable with this method of grading. Students achieve on their own merit, rather than being compared with or competing against others.
For us, I think, the choice is made - our daughter will be going the IB route. One of the core values of our previous school was "the pursuit of excellence is worth the effort" - and for us I think this sums it up. The IB may well be a harder choice, but in the end we believe it is worth it.
Posted by Maggie Hos-McGrane at 5:51 PM