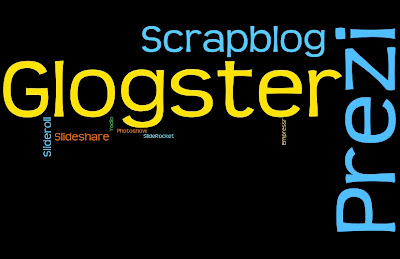 I teach Grade 7 MYP Technology every Friday afternoon. Every student has technology with me whenever they are not having their instrumental music lesson. In earlier posts I have outlined my struggles to come up with a meaningful programme for these students when my only brief was to "teach them Excel" and "integrate with what the science teachers are doing". For the past few weeks students have been investigating, designing, planning and creating ways to teach younger students how to use Excel using Web 2.0 tools. Each Friday for the past 3 weeks groups of students have come to show me and the rest of Grade 7 what they have created, and it has been interesting to see which tools they have chosen and their reasons for making those choices. To date, approximately 50 students have presented to the rest of the grade, sharing what they have done. The Wordle above shows how popular the different tools are. Up to this week the clear favourite of our students was Prezi, but today for the first time we had more students using Glogster. In total approximately one third of the students have chosen Prezi and one third have chosen Glogster, with the final third divided between a number of other tools.
Today I had two students who had obviously struggled over their presentations - both are new to the school. The first, a Japanese girl, has only been learning English for the past year. She found this a very daunting assignment as it was hard for her to actually explain in English. Last week she had come with a PowerPoint which I had to tell her was not a Web 2.0 tool. This week she turned up with Slideshare - she had uploaded her PowerPoint so that she could share it with us. She spoke incredibly quietly (and was in serious competition with the drumming lesson next door) but the other students were very respectful and listened hard. As she talked she grew in confidence - everyone wanted her to succeed - they were literally hanging on her every word. At the end the entire group applauded her. She did a fantastic job.

The second student who was clearly challenged with this task was a boy who only arrived in school a few weeks ago. He had missed all the earlier lessons at the beginning of the year where I was working with the science teachers graphing the experiments they did. He had never used Excel before, therefore he first had to learn it from scratch by himself and then secondly he had to teach it to someone else using a Web 2.0 tool that he was also unfamiliar with. He chose to use Prezi which was a great choice. Again, students were supportive and applauded him too.

Somehow over the past few months I have seen a definite change in this group of 7th Graders. At the beginning of the year they were the usual 13 year olds, fed up with school by Friday afternoon and looking forward to the weekend. The last thing they wanted to do was to spend the afternoon graphing science experiments! They laughed a lot at each other and basically were not motivated to learn very much. Giving the students responsibility for their own learning by giving them the complete choice of what tool they wanted to use and how to show their understanding has changed all that. Some of the students chose tools that I have never used myself. They had to play around with them and discover for themselves what to do as I stepped right back and didn't teach them anything, just encouraged them to have a go. What actually happened was that they supported each other in this learning - today some students said they chose the tool they did because they were able to get a lot of help from others in the class. They have definitely become more of a community supporting each other through this. What I have also seen is that although I never set any homework at all for this class, many of the students continued to work at home or else came in during the recess times to work on the computers. This week I have been teaching a lot of classes of Kindergarten, with any extra computers in the room being taken up by the 7th graders who wanted to make their presentations just that little bit better. It has been good for them to be with me when I've been teaching Kindergarten, and it has certainly been good for the Kindergarten students to see the "big kids" beavering away next to them.

Next week should be the last week of this assignment, and I'm wondering whether I'll be seeing the same "big two" tools being used again, or whether next week's students will have explored some other, different tools. Then after the holiday we'll be leaving information technology for a while and moving onto design technology - we'll be making kites. Now this is definitely going to be something where the students will also have to do a lot of independent work as I know nothing about kites and have very little skill at making things out of different materials. However I'm hoping all the skills that the students have been developing over this half year, the skills of research and cooperation, will be utilized once again so that they will once more be proud of their creations.
Posted by Maggie Hos-McGrane at 2:55 AM