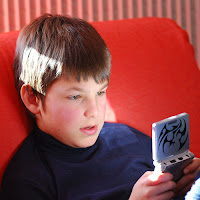 Back in January I first wrote a blog post about the concept of play.  In March, when I went to the Apple Education Leadership Summit I attended a presentation about the New York school Quest 2 Learn which uses the design principles of games to create a game-like learning experience for students.  I was intrigued with this idea at the time, but have only recently started to look a little deeper into it.  Then this week I had a Kindergarten class who asked if they could play the number bonds game Save the Whale for their last lesson and I started thinking again more seriously about the benefits of learning through play or games.

Quest 2 Learn uses games to enable students to "become" historians, explorers, mathematicians and so on in different worlds.  The games are "rule-based learning systems" and the players cannot learn passively as they have to seek knowledge, use strategic thinking, make choices, work in collaborative teams to interact and solve problems, consider other's viewpoints and - what I have seen is very important in games - they receive immediate and constant feedback about how they are doing.
Dan Pink talks about play in his Whole New Mind book too - it's another of the aptitudes essential in the Conceptual Age (along with design, story and symphony that I have written about earlier).  In this chapter Dan writes "people rarely succeed at anything unless they are having fun doing it" - which reminds me of the whole Thai idea of "sanuk" (having fun).  Thai people love to have fun - sanuk is really important in their everyday life and it is also very social as it happens with other people.  Thai people are far more likely to ask you if something you have done was fun, than if something you have done was successful.
When I read Dan's chapter on play I learned a lot of things about computer games.  For example:
Why is gaming such a powerful form of learning?  James Paul Gee, a professor at the University of Wisconsin says it's because "learning isn't about memorizing isolated facts.  It's about connecting and manipulating them".  Studies have shown that gaming increases visual perception, the ability to recognize patterns and detect changes and the capacity to process information simultaneously.
My most recent experience with games was the Coffee Shop Game, which I wrote about in a previous blog post.  Our 4th Grade students played this game to buy and sell ingredients to make coffee, decide on the recipe and fix a price.  The idea of the game was to make the most money by deciding how much stock to buy each day, coming up with a tasty coffee recipe and setting the price to take account of supply and demand.  When they later set up their own trading fair at school to sell products they had made or services they could offer - which ranged from homemade bookmarks to mohawk hair styles - they used these understandings to run a small business for other students and to make a profit that could be used to buy supplies for the class.  It was a very successful activity, more so because the students had already had the experience of a "trial run" of setting up a business through the game they played at the start of the unit.
So this summer I'm going to do a little more research - and see what online games I can find to try to deepen the students understanding and to enhance their learning.
Photo Credit:  Starting the game by Nico Carvallotto
Posted by Maggie Hos-McGrane at 12:02 AM