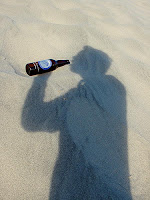 I am currently working on a unit of inquiry with one class of Grade 5 students that deals with physical, social and emotional changes at different stages of our lives and focuses on rights and responsibilities associated with each.  When talking to the students about what they can and cannot do at different stages, they have mentioned things like adults being able to vote and get married, or teenagers being able to drive.  Of course the age at which you can vote, drive or get married varies from country to country.  In a similar way so does the age at which you can buy and drink alcohol.

One of the chapters in Dr Aric Sigman's book that I am currently reading is entitled The Devil's Buttermilk.  In this chapter Dr Sigman outlines the issues associated with alcohol use during adolescence and the role alcohol can play in preventing teenagers from developing self-control.  When teenagers drink they are affecting brains that are still undergoing development.  He discusses figures from the UK which show alcohol use is associated with 50-70% of homicides, stabbings, beatings, fights and assaults and that the UK has the worst figures in 35 European countries for binge drinking and alcohol related problems in 15 and 16 year olds.  Alcohol is number 5 in the Lancet ranking of Britain's most dangerous drugs (ahead of ecstasy, LSD, solvents, amphetamines and cannabis) and Dr Sigman debunks the myth that allowing teenagers to have small amounts of alcohol at a young age at home with the family will prevent binge drinking later on (he asks would we have the same attitudes in other areas - that early sexual encounters would prevent later unwanted pregnancies or that early exposure to cigarettes might prevent nicotine addiction later, for example?) and quotes from American studies that show having a first taste of alcohol before the age of 15 increases the risks of alcohol-use disorders that persist into adulthood.

In the countries that I've lived (which include the UK and the USA) there are many mixed messages we are giving our teenagers.  In the UK while it's only legal to buy alcohol over the age of 18 in a supermarket or off-licence, it's actually legal to give alcohol to children over the age of 5 in their own home with parental permission, children can sit in pubs with adults who are drinking until 9pm in the evening, 14 year olds can enter a pub unaccompanied by an adult if they order a meal and 16 and 17 year olds can consume a glass of wine, beer or cider if they also order a meal (these facts were taken from a website from Woodland's Junior School in Kent).  In Switzerland, where we currently live, teenagers of 16 and over can buy beer and wine, but not spirits - though I've seen plenty of teenagers here drunk after consuming beer and wine.  American parents who have come here with their teenagers have spoken to me about how shocking they have found this - in the USA the age for buying alcohol is 21 and in some states people under 21 cannot enter a bar or off-licence or even drink in their own homes.

This is a difficult area for parents of international students, who have come from countries with very different laws - and even more so because a lot of parents drink alcohol socially themselves.  It's one thing for non-smoking parents to tell their children not to smoke, but quite another thing for parents who do drink a glass of wine or beer socially in the evenings to tell their teenagers not to drink.  I don't have any easy answers here, but as a mother of 2 teenagers I am certainly starting to think more about this issue as a result of reading The Spoilt Generation and as a result of discussing rights and responsibilities with our Grade 5 students.