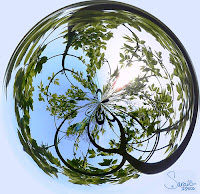 This year is the first full year I've been writing about my experiences as an IT teacher working at an international school in Switzerland in my Tech Transformation blog.  During the past year I've written over 250 posts on this blog alone, as well as contributing to other educational blogs and in addition I've written almost 100 posts on another blog about living in Switzerland.  For someone who never really used to write much at all (I remember writing a weekly letter to my parents when I was a student at university and was often stumped for things to say), I seem to have spent most of the year being reflective and being a communicator.

The IB Learner Profile - Caring:  This post was a controversial one, not because of anything I had written but because one of the comments on this post was from an organisation called The Truth About IB which claimed that the IB was a UN indoctrination programme.  Thankfully many of the readers responded to this comment - thanks for your support.
The SAMR Model:  I wrote this post after attending a presentation by Stephanie Hamilton at the Apple Leadership Summit in Prague.  Stephanie talked about the goal of IT being to transform learning, rather than to enhance it.  I'd never heard of this model before and it made an enormous impression on me.  I remember thinking at the time that Stephanie had summed up everything I'd ever believed about how technology should be used - in fact all the reasons why I'd decided call my blog Tech Transformation in the first place.  Over the next few months this model became part of the discussions we had at school about how we should move forward, and this year at collaborative planning meetings I frequently refer to it when we plan how the IT will support the programme of inquiry.  As the SAMR model has been so influential on my teaching during the first half of this school year, I'm really pleased to see that others have been interested to read about and explore this model too.
Assessment OF Learning -v- Assessment FOR Learning: I've been conscious of this distinction for many years and feel passionately about formative assessment as a way of planning for learning.  The first PYP workshop I ever attended over 15 years ago was on assessment and it was a real eye-opener for me.   My thoughts on assessment were further developed when I attended Project Zero, back when I was working in Amsterdam.  This year I have found it exciting as an IT teacher to be part of both formative and summative assessment for various units of inquiry.  And as one of my favourite bloggers, Edna Sackson, wrote on one of her blogs posts last year, formative assessment allows you to go on to "feed the elephant" as opposed to merely "weighing the elephant".
PLN -v- PLC:  I have struggled a lot with this one this school year.  Being part of a professional learning network has been the most exciting form of professional development I've experienced during almost 30 years of teaching.  However this year I have tried hard to build up more of a learning community with the colleagues I work with day-to-day.  This has been a lot more difficult that I expected and something that I feel I need to work much harder on during the second part of this school year.
Which Inquiry Cycle?  Inquiry is the basis of the IB Primary Years Programme and this year at school we finalised what our inquiry cycle should look like.  More recently I feel we have been able to build on this, infusing the IT into the inquiry cycle, as we adopted the following IT strands:


As a result of thinking about the inquiry cycle and seeing how IT supports the various parts of the cycle I have started rewriting the IT curriculum and in addition the inquiry cycle has become a school-wide strand which we are looking at in drawing up learner outcomes for all students in the school.
A year ago I sometimes wondered what on earth I would want to write about in my blog, and even more whether anyone would ever read it - I would never have predicted that hundreds of people would read it every day.  However, despite whether or not anyone ever reads what I write, I can appreciate how much more reflective and how much better I communicate as a result of writing a blog.
My thanks go out to Kelly Tenkely who started the Blogging Alliance which has given me invaluable support over this past year.
Photo Credit:  Gotcha by Sarah Spaulding
Posted by Maggie Hos-McGrane at 12:01 AM