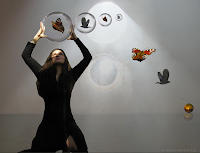 This year at school there has been an attempt to tie the professional development programme in with improved student learning - this is being done by helping staff to achieve appropriate professional goals which in turn will help students and teachers achieve their full potential.  We start with a preliminary goal setting meeting and then have further discussions throughout the year to reflect upon our classroom practice.

Because last year was my first year at the school, I was given a formal appraisal - now I'm in the part of the cycle where I'm involved in ongoing goal setting and professional development.  This year, after quite a bit of thought, I decided I wanted to explore the 7 Visible Thinking core routines and to make more use of the Project Zero throughlines.  Last year I had these throughlines written up and displayed in the lab, but I have to admit that I didn't refer to them with the students very much.  This year I am trying to refer to these a lot more with the 3rd through 5th Graders who actually use that lab.

Questioning is something that I do a lot of in ICTL, and this year I have tried to get the students familiar with the thinking and questioning routines - I have been trying to use them with all grade levels and in all units of inquiry so that they become part of the ICTL class culture.  The first part of the year was spent getting familiar with the thinking routines and the second part of the year will be spent trying out the different routines with the different classes.  I'll be blogging about the routines, how they were used and what I've learned by trying them out.  I'm also going to be trying out the different thinking routines in this blog, to document the process of my own learning.  Eventually I'd like to attend a VT workshop and start a VT group at school - I've been at a previous school where this was done very successfully though I know I need to set realistic goals for myself in my current school and take account of the fact that it has gone through a lot of change and that change is very stressful - this means that teachers have less time and inclination to take on even more new things.  This final part of my goal may, in fact, be something that I will need to put off until another year.

Reflection so far:  Now that I'm almost half way through the year I have been able to use the following routines:
What makes you say that?  This is an interpretation with justification routine and is described on the Project Zero website in the following way:


This routine helps students describe what they see or know and asks them to build explanations. It promotes evidential reasoning (evidence-based reasoning) and because it invites students to share their interpretations, it encourages students to understand alternatives and multiple perspectives.

The times I have used this thinking routine have so far mostly been when tuning in to a new unit of inquiry - almost using it as a way of assessing prior knowledge.  I've used this routine with a whole class and have continually asked "What makes you say/think that?"  Up to now the students have not yet internalized the routine so that they automatically start to justify or support their interpretations, so I find I'm doing a lot of the questioning.

Think, Pair, Share  This routine involves asking a question and then having the students turn to a partner and share their thoughts.  The VT website explains the purpose of this thinking routine:

I have used this routine fairly sporadically but realise I can use it much more to encourage all students to participate, rather than some just listening to what the others are saying.  I'm going to make a real effort to use this routine more in the second half of the year.

I See, I Think, I Wonder  I have used this routine with students in Grades 2 and Grades 3 to explore their thinking about artwork and about photographs they have taken around one of our school buildings (we were thinking about whether the photos were of old things that were there since the villa was built, or whether they were new and added on afterwards).  The VT website explains the use of this routine:


This routine encourages students to make careful observations and thoughtful interpretations. It helps stimulate curiosity and sets the stage for inquiry. Use this routine when you want students to think carefully about why something looks the way it does or is the way it is. Use the routine at the beginning of a new unit to motivate student interest or try it with an object that connects to a topic during the unit of study. Consider using the routine with an interesting object near the end of a unit to encourage students to further apply their new knowledge and ideas.

With our Grade 2 students they mostly used I see (to describe the photograph they had taken) and I think (to say whether they thought it was old or new).  Our Grade 3 students were able to use all 3 stems when looking at illustrations for a book.  In both cases I worked with the students individually on this thinking routine.  The Grade 2s recorded their thoughts on a VoiceThread and the Grade 3s wrote a comment to a blog post.

What has worked and what still needs to be worked on?  It's clear to me that the most successful of these visible thinking sessions have been when the class teachers themselves are familiar with the visible thinking routines - two of the teachers in Grade 2 and one of the Grade 3 teachers has used the routines with their classes and with these students it is definitely easier for me to pick up the same routines.  With other classes it has been harder since I don't see the students as much as the homeroom teachers do and it's hard to do some of these routines in isolation.

I'm looking forward to trying out the following routines during the second half of the year:
Think, Puzzle, Explore - for tuning in to a new unit of inquiry.
Circle of Viewpoints - for exploring diverse perspectives.
Compass Points - for exploring an idea before taking a stand on it (perhaps I can use this one with the student council as I'm not sure I'll be able to use it in the ICTL lessons).
I used to think ... but now I think - a routine for exploring how and why thinking has changed.  I did a similar activity last year with one Kindergarten class having them take photos of things they thought were living and non-living at the beginning of their unit of inquiry and then revisiting those same photos at the end of the unit to see how their thinking had changed.  It was amazing to capture the thoughts of one boy who said at the beginning of the unit that grass was non-living because it did not move around, but by the end of the unit he knew it was living because it could grow.